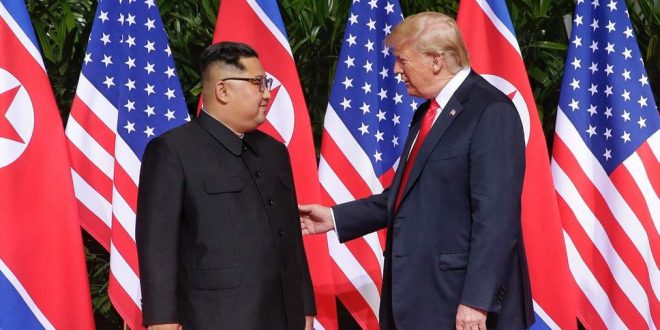 Researchers claim to have discovered a secret missile base in North Korea that could distort negotiations during an upcoming summit between that country and the United States next month.
The Sino-ri Missile Operating Base is among 20 undisclosed missile sites in North Korea, according to the new report from Beyond Parallel, a group sponsored by the defense think tank the Centre for Strategic and International Studies.
The new report’s release comes just after a Friday announcement that Donald Trump “looks forward” to meeting with North Korean leader Kim Jong Un in February “at a place to be announced at a later date”.
“The North Koreans are not going to negotiate over things they don’t disclose,” Victor Cha, an author of the new report, told NBC News, which first reported the new missile base.
He continued, noting that North Korea could destroy its recognized bases as a part of a deal with the US and still maintain missile testing: “It looks like they’re playing a game. They’re still going to have al this operational capability”.
The missile base was discovered through the analysis of satellite photos from December, which showed what appears to be at the entrance to an underground bunker. The photo evidence also appears to show infrastructure consistent with what would be found at a missile test site.
The White House has not commented on the new missile base, and how that knowledge might impact the upcoming negotiations.
Mr Trump and Mr Kim became the first two leaders of their countries to meet last year during a summit in Singapore, when negotiators reportedly discussed plans for North Korea to end its missile testing progamme. They are planning a second, some time in February.
Since the Singapore summit, the two sides have indicated that negotiations are ongoing.