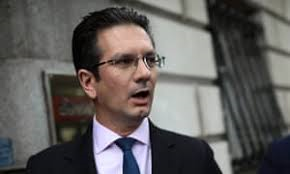 Former Brexit minister Steve Baker says ‘in the end, it’s not really about the backstop’