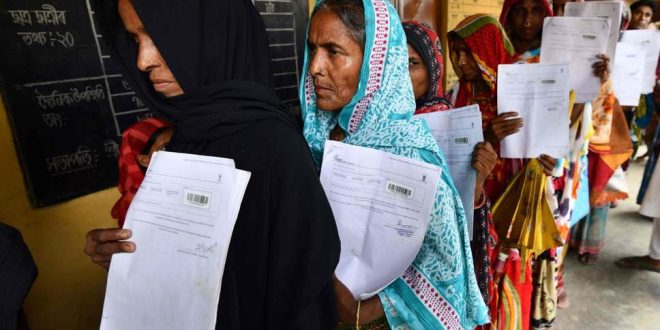 India has effectively stripped 4 million people from the state of Assam of their citizenship.
The state has a National Register of Citizens (NRC), which includes the names of all those who can prove they came to the state before 24 March 1971 – the day before Bangladesh declared independence.
India has now released a final draft of a list of its citizens, leaving some 4 million people to prove their Indian nationality.
It says hundreds of thousands of people have illegally entered the country from neighbouring Bangladesh over decades and settled down in the northeast – a claim which Bangladesh rejects.
The application process for inclusion in India’s national register started in 2015. Of the 32.9 million applicants, the names of 28.9 million have been approved and included in the draft, India’s registrar-general Sailesh told reporters in Gauhati, the capital of Assam state.
Mr Sailesh said more than 4 million who have been left out can file appeals by 30 September and prove their Indian nationality by providing documents – until then, no one will be declared an illegal migrant.
“Adequate and ample scope will be given to people for making objections. No genuine Indian citizen should have any fear,” Mr Sailesh said.
Allegations of illegal movement of people from India’s border with Bangladesh have triggered sectarian tensions between the state’s indigenous population and Bengali-speaking Muslims.
Hundreds of Bengali-speaking Muslims whose nationalities are suspect are living in detention camps in Assam state.
People were asked to provide documents proving that they or their family members lived in India before Bangladesh’s independence.
The final national register containing the names of only Indian nationals, after determining illegal migrants, will be published after the disputed claims are settled.
“Nowhere else in India have we carried out such an exercise to have a list of Indian nationals,” said National Register of Citizens coordinator Prateek Hajela.