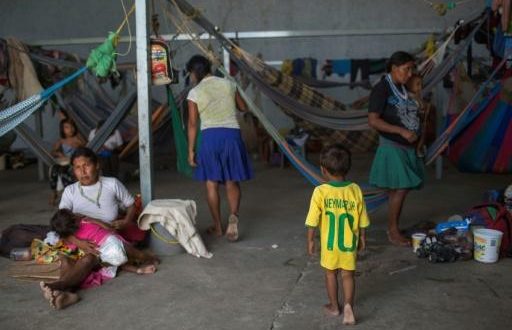 Pacaraima (Brazil) – The remote Brazilian town of Pacaraima is used to outsiders — tourists curious about spectacular nearby mountains — but a sea of Venezuelan refugees is pushing locals’ hospitality to breaking point.
Before, Pacaraima’s main attraction was its location near Monte Roraima in Venezuela, believed to have inspired Arthur Conan Doyle’s “Lost World” fantasy adventure.
But now the town has become a focal point for the exodus from economic collapse and political violence just across the border.
Every day, between 500 and 1,200 impoverished Venezuelans come over the frontier into Pacaraima, swamping the sleepy community.
The arrivals — designated refugees by the United Nations — sleep in the streets, cram into inadequate shelters, and are blamed by some for problems like increased prostitution.
“It’s out of control,” said Catholic priest Father Jesus Lopez, who runs a soup kitchen for the Venezuelans in Pacaraima.
– Bad for business –
Refugees are estimated to have swelled Pacaraima’s population of 12,000 by a third.
But despite the increased traffic, the local economy is suffering.
“There’s a lot of movement and little money. My sales have fallen because there are fewer tourists and they were the ones who brought in money,” said Zilma Rocha, who has a kitchen serving breakfasts.
About the only people seeing an uptick in trade are the currency dealers, who sell the Brazilian real to their neighbors.
Some supermarkets are also seeing new business, with Venezuelans crossing the border just to buy food they can’t afford or find back home.
“Everything is cheaper here. Over there, 80 reais ($25) won’t buy you anything, but with that amount here you can get rice, sugar, flour, butter, soap, biscuits, juice and hygiene products,” said Jonathan do Santos, who frequently makes the trip.
“The lack of food in Venezuela has created opportunities here and our businesses are taking advantage of that,” said Ruan Silva, whose supermarket in Pacaraima is one of the few accepting the nearly worthless Venezuelan currency, the bolivar.
– End of the road –
Lopez, the priest, said Brazil’s government has not done enough to help communities like this prepare for the influx. But he said he understood the desperation driving the fugitives.
“These people are running from hunger, from death,” he said.
Most Venezuelans arriving in Pacaraima try to move straight on to the nearest sizeable city in Brazil’s Roraima state, Boa Vista, where much of the refugee aid is centered.
But for some, that 134 mile (215 km) trip — and the $16 taxi ride — is a step too far.
“We had planned to go to Boa Vista but things sound terrible there,” said Jose Pena, 22, who had traveled more than 930 miles (1,500 km) with his family from Carabobo in Venezuela.
“We prefer to stay here,” he said, while tending a cooking fire. “At least here we can eat.”
Abilio Mendez, 46, who traveled all the way from Puerto La Cruz on Venezuela’s Caribbean coast, simply couldn’t afford to go any further than Pacaraima.
“It’s everything left in my life,” he said, pointing to his two suitcases.
His solution for getting to Boa Vista? To set off under the punishing sun and try to walk.