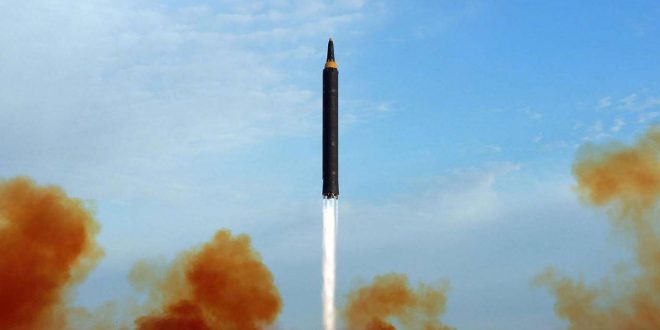 Japan has reportedly offered to pay more than £2m to fund any international inspection of North Korea’s nuclear facilities in a bid to encourage the rogue country to ends its weapons programme.
Tokyo made the gesture after Pyongyang pledged to scrap its weapons and asked for direct talks with Donald Trump over the crisis.
The US President has agreed to meet with North Korean leader Kim Jong-un in a meeting expected to take place in May and the country has agreed to halt all further tests.
The first step for North Korea to end its missile programme would be to allow inspectors from the International Atomic Energy Agency to assess its current nuclear facilities.
Japan has offered to pay Y300 million (£2.02m) to help fund the work which has been estimated to cost up to ¥400 million (£2.7m), the Japan Times reported, and to pay more if the bill rises.
Its foreign minister Taro Kono and IAEA Director-General Yukiya Amano agreed in Vienna last month to work together more closely in the hopes of resuming the checks, the publication said.
The move is seen as an effort to stay in the loop after South Korea tabled talks between Mr Trump and the North over the missile crisis which has threatened war in the Asian region.
Mr Trump, earlier agreeing to the gathering, tweeted: “Great progress being made but sanctions will remain until an agreement is reached. Meeting being planned!”
The IAEA agency last carried out an assessment of the Pyongyang’s nuclear facilities in 2009, when the country expelled its inspectors and resumed its atomic programme.
It has launched six nuclear tests to date, with the biggest last September when it exploded a hydrogen bomb that could in theory be loaded onto a long-range missile.
In 2017 North Korea test-fired 23 missiles, including launches of missiles fired over Japan, more than 1,000km away.