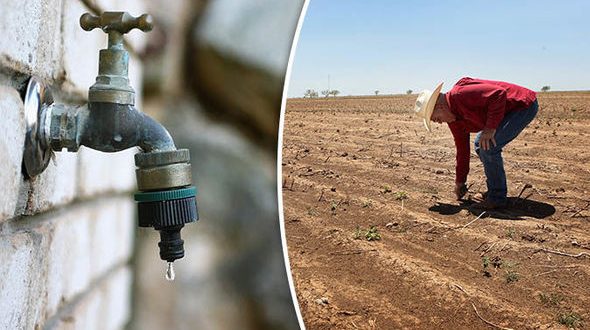 THE world is on the verge of a water crisis, experts have warned, with big business shelling out an incredible £23.4 billion to secure their supplies.

Corporations are panicking their fresh water could dry up in the coming years as global temperatures soar and droughts wreak havoc.The World Economic Forum now ranks the world water crisis second only to terrorism and climate change as the biggest calamity facing humanity.

Flooding, huge storms, such as Hurricane Harvey, and raging forest fires of the kind that ripped through California are all contributing to the crisis.

He said: “From Bangladesh to Peru and the US, climate risks – and in particular water risks – have been very real in 2017.

“From storms to droughts, and floods to forest fires, the damage has been enormous.”

Last year, a report by the University of Twente warned four billion people worldwide are affected by severe water scarcity for at least one month a year – a much higher figure than previously thought.And a huge swathe of the globe is being hit, including the western US, southern Europe, Australia and large parts of Africa.

The UK is also affected, with increasing numbers of hosepipe bans over the summer months to prevent a drought in the south.

It is thought the rise in population worldwide and increasing consumption could be escalating the crisis.

Report author Arjen Hoekstra said: “Groundwater levels are falling, lakes are drying up, less water is flowing in rivers, and water supplies for industry and farmers are threatened.“All over the world, it is clear that the risks associated with high water consumption are being increasingly recognised.

“The growing world population, changes in consumer behaviour, and climate change are having a significant impact on the scarcity and quality of water.”

Paul Simpson, chief executive of CDP, warned the potential economic risks were huge, with losses running into billions of pounds, and welcomed the huge financial commitment by firm

He said: “The stakes are high as we assess corporate progress towards a water-secure world.

But others have warned the steps taken so far are not nearly enough.

Eoin Murray, head of investments at Uk asset management firm Hermes, told the Financial Times: “Businesses are not yet taking this seriously enough.

“The spending is still a drop in the ocean. But any kind of progress is welcome.”