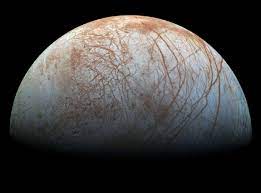 The discovery of ice ridges in Greenland similar to those found on Europa suggest water from the Jovian moon’s subsurface ocean could lurk near the surface.

The liquid water ocean swirling against a rocky interior makes Europa a prime target in the search for extraterrestrial life, but its icy crust, perhaps as thick as 30 kilometers, has meant that ocean is likely frustratingly out of reach of future space missions.

But a new study published Tuesday in the journal Nature Communications suggests planetary scientists might find an alternative path to sampling the deep waters of Europa. Scientists have found a type ice ridge in the Greenland ice sheet on Earth that looks very similar to the many ridges stretching around Europa’s surface, and if the structures share a mechanism, it could mean water from the moon’s depths can be found — and maybe even accessed — at shallow depths within Europa’s ice.

Riley Culberg is a geophysicist studying Ice sheets and glaciers at Stanford University in California, but he works with an interdisciplinary team of researchers who often share their work with each. Still, when one of his colleagues was showing the team images of ridges crisscrossing Europa’s surface, he was taken by surprise.

“It’s like, ‘Wow, this looks exactly like this super weird thing that I saw in my data from Greenland the other day,’” Dr Culberg said.

What he had seen in Greenland was a “double ridge,” a nearly kilometer-long line of parallel ridges of ice, about two metres tall, separated by a trough about 50 meters-wide.

“If you sliced it in half and looked at the cross-section, it would be kind of like the capital letter ‘M’,” Dr Culberg said.

While the double ridge in Greenland is the only one of its kind found so far, Europa contains many such double ridges, albeit at a larger scale.

In Greenland, Dr Culberg said, the double ridge appeared to be the result of water melting on the surface and then infiltrating down into the ice where it refreezes.

“Because water expands when it freezes, that interior water in the core of this pocket gets pressurized,” he said. “We think eventually there was so much pressure there that it fractured, and that you have these little sort of up-shoots of water getting forced out of the water pocket and then sort of forced the surface to also dome up into these ridges.”

A similar mechanism could be at play on Europa, except Europa’s surface is far too cold to melt ice. If there is water at a shallow enough depth in Europa’s ice shell to refreeze and create the double ridges, it must have come from below.

“This is maybe water from the subsurface ocean that can get forced up through fractures inside of the ice shell,” Dr Culberg said. “Or possibly you could get some kind of internal melting inside of the shell if you have a like plume of warm, buoyant ice that rises far enough up in it.”

However it gets there, the paper suggests that material from much deeper in Europa’s ice, or beneath, could be found in depths as shallow as a few kilometers, raising the prospect that future space missions could access that material, and assess whether it contains signs of life. Whereas drilling through 30 kilometers of hard ice is a big task, drilling through a few kilometers happens on a regular basis on Earth.

“We absolutely do drill deep ice cores through three and a half kilometers of ice in central Greenland or central East Antarctica,” Dr Culberg said. “It takes a pretty big setup, it takes a lot of power — you’re not going to pop this on like a Mars-sized rover or something — and it’s going to be difficult, but this is something we do on Earth.”