Home / Last News / Al-Makari From Dinniyeh: Do Not Be Affected By Electoral Money, But Vote For The Historical Relation Between Zgharta And Dinniyeh 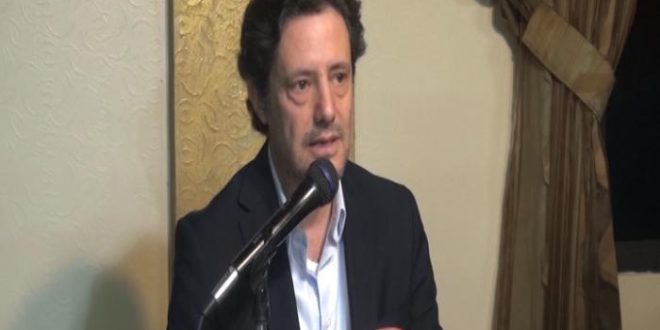 Al-Makari From Dinniyeh: Do Not Be Affected By Electoral Money, But Vote For The Historical Relation Between Zgharta And Dinniyeh

Information Minister Ziad Al-Makari, underlined today the “deep historical ties linking both Zgharta and Dinniyeh together,” and called on citizens of these regions to “vote for this historical relation through which we are fortified in the face of challenges.”

He added that “the Ministry of Information’s priority is safeguarding public freedoms,” and urged voters to “exercise their democratic right and turn out massively at the ballot boxes” during the upcoming parliamentary elections.

The Information Minister’s words came during a Ramadan Iftar held in his honor by Attorney Ahmad Shandab, alongside MP Jihad Al-Samad, at his home in the town of Bkarsona in Dinniyeh, which was attended by the head of the Union of Municipalities of Dinniyeh, Mohammad Saadieh, and various mayors and dignitaries from the region.

In a brief word during the Iftar, Minister Al-Makari expressed his appreciation for the warm gathering held in his honor and his joy to be amongst his people in Dinniyeh, saying: “Dinniyeh has a special place in my heart, as it includes family, friends and loved ones. It is the beloved neighbor of Zgharta, and a symbol of coexistence and national brotherhood.”

He added: “From Dinniyeh, I began my political career, and ran for parliamentary elections…Although it was not with Zgharta in one electoral district, yet we have always worked as if they were one electoral district. We remained in constant contact despite everything, for our homes and yours remained open and integrated.”

Referring to the upcoming parliamentary elections’ preparations, Al-Makari indicated that he is meeting almost weekly with various media outlet representatives, including representatives of television stations, newspapers, radio stations and news websites. “Our goal is to maintain a tranquil atmosphere, especially as we are going through a difficult stage in the country’s history, and the upcoming elections are amongst the hardest,” he said.

Al-Makari stressed “the necessity of approaching the elections in a democratic manner, not just out of competition, in order to lay the foundation for a new country, especially that the state is absent after it has been looted and robbed.”

“After May 15, Lebanon will move to a new stage, perhaps to a new government and new politicians,” he said.

Also within the context of the anticipated elections, Al-Makari asserted that his Ministry’s priority is to “protect liberties, particularly since freedom of expression is most precious in Lebanon.”

He added: “We always stress the importance of responsible freedom, freedom that is harmless, but based on morals and respect for the other under the rooftop of democracy.”

He criticized “electoral money,” and called for “democratic competition,” encouraging citizens to “exercise this right freely.”

“The voters should exercise their democratic right and national duty and express their opinions freely, within their conviction that whoever they elect will contribute to developing the country,” the Information Minister underscored.