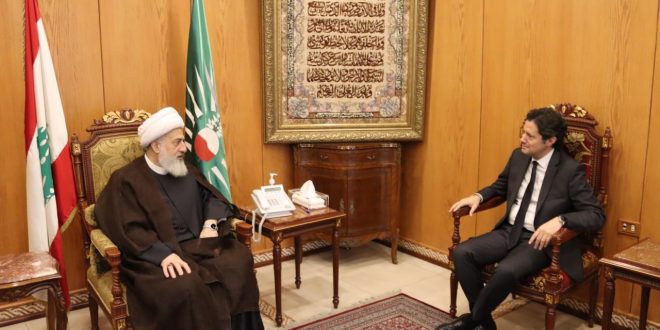 Al-Khatib Welcomes Al-Makary, Touts Culture Of Communication “Away From Incitement”

Vice-President of the Supreme Islamic Shiite Council, Sheikh Ali Al-Khatib, on Tuesday welcomed Minister of Information, Ziad Al-Makary, with whom he broached an array of media affairs, as well as the latest local and regional developments.

Al-Khatib, who welcomed Minister Al-Makary at the council’s headquarters, considered the media a message of faith  that must be preserved by adhering to honesty and objectivity, away from sectarian strife and incitement.

Al-Khatib also stressed the paramount importance of having the Lebanese media contribute to strengthening cooperation between the Lebanese by means of spreading an atmosphere of understanding, a culture of communication, and avoiding tense discourse that distances the Lebanese and stirs up strife.

For his part, Al-Makary said that his acquaintance visit to Sheikh Al-Khatib was part of a series of meetings he’s been holding with the country’s spiritual leaders.

“We’ve briefed His Eminence on the atmosphere of the meeting that was held at the Ministry of Information yesterday with all the Lebanese media; it was a dialogue session to organize our ‘internal house’ during parliamentary elections,” Al-Makary said, adding that talks with Al-Khatib also touched on sectarian and national dialogue.

Al-Khatib separately welcomed Islamic Resistance Movement (Hamas) Representative in Lebanon, Dr. Ahmad Abdel-Hadi, who conveyed the greetings of the movement’s leader, Ismail Haniyeh, and congratulated the Sheikh on the blessed month of Ramadan.