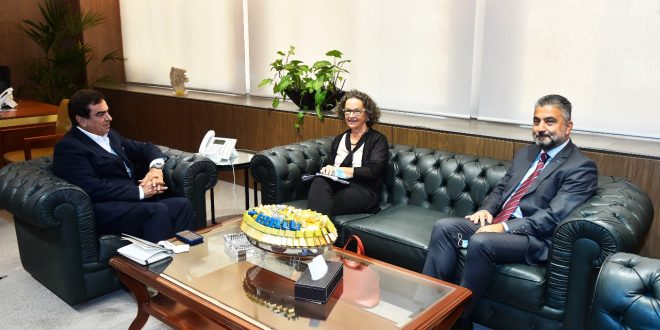 Minister of Information, George Kordahi, on Monday received in his office at the Ministry, the Director of the UNESCO Office in Beirut, Costanza Farina, accompanied by the Communication and Information Officer, George Awad.

Discussions reportedly touched on the means of cooperation between UNESCO and the Ministry of Information and the possibilities of UNESCO’s assistance at the level of Radio Lebanon (Radio Liban) and Television of Lebanon “Tele Liban.”

The achievements made by UNESCO in terms of training courses on hate speech and the protection of journalists in conflict areas were also presented.

Farina hailed the “good cooperation between the Ministry of Information and UNESCO,” highlighting UNESCO’s goals, “most notably equality between men and women, combating false news and the right to access information, in addition to the media’s role in parliamentary elections and the protection of press freedom.”

In turn, Minister Kordahi announced that he is in the process of developing a plan to regulate the conditions of Tele Liban and all the institutions affiliated to the Ministry of Information, underlining “respect for freedom of expression.”

On the other hand, Minister Kordahi received a delegation from the family of “Sky News” photojournalist Samir Kassab, who went missing in Syria 8 years ago.

The delegation congratulated Minister Kordahi on assuming his new ministerial post, hoping that he would follow up on Samir Kassab’s case with all the security and political authorities to unveil his fate.

The Minister also met with Tele Liban Board Chairman, Toufic Traboulsi, and Journalist Dina Ramadan, who was appointed as TL News Director.