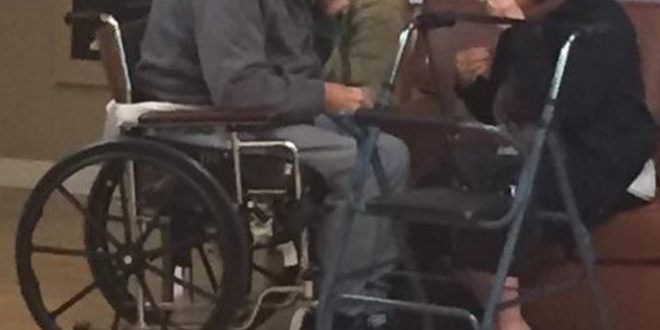 An elderly Canadian couple who have been married for 62 years have been forced to live in separate care homes.
A photo of Wolfram Gottschalk, 83, and his wife, Anita, 81, went viral after their granddaughter shared their story.
Ashley Baryik, 29 said her grandparents have been separated because there is no room for both of them at the same home in Surrey, British Columbia.
Mr Gottschalk, who has been diagnosed with lymphoma, is on a waiting list to move into the same home as his wife.
In a Facebook post on Tuesday, Ms Baryik posted a touching image of her “Omi and Opi” wiping away tears as they held hands, adding that it was “the saddest photo I have ever taken.”
The image has been shared more than 6,000 times online.
Ms Baryik explained that her grandparents were separated in January when Mr Gottschalk went to hospital for congestive heart failure.
While waiting to be placed in nursing home, his wife, Anita, also applied for senior assisted living with the aim of joining her husband.
Mrs Gottschalk was placed in a home first while her husband was moved to a transitional facility, where he continues to wait for an open bed at his wife’s home.
“It’s heartbreaking for my grandmother, she wants to bring her husband home every night,” Ms Baryik told the BBC.

The couple, who have lived apart for eight months, cry every time they are able to see each other, she added.
“It’s been emotionally draining for both of them.”
Ms Baryik said she appealed for help on Facebook after Mr Gottschalk was diagnosed with lymphoma earlier this week, bringing a new sense of urgency to reunite the couple.
the family blamed the couple’s separation on “backlogs and delays by our health care system”.
Ms Baryik said the family’s pleas to Fraser Health had not been answered over the last eight months, but a spokeswoman contacted them on Thursday to say that finding her grandfather a bed was their number one priority.
The outpouring of support, Ms Baryik said, has been overwhelming, but the family refuses to take donations in order to keep the focus on Canada’s senior care system.
“Taking money defeats the purpose for fighting for families who can’t afford privatised beds,” she said.
“We want everyone’s focus to be on fixing the system rather than raising money and putting a band-aid on the issue.”