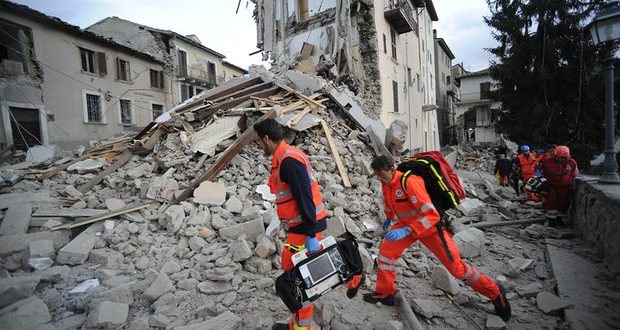 A strong earthquake brought down buildings in central Italy early on Wednesday, trapping residents and sending others fleeing into the streets, with at least six people believed killed.
The worst hit towns were believed to be Accumoli, Amatrice, Posta and Arquata del Tronto, Fire department spokesman Luca Cari told Reuters, adding that helicopters would be sent up at first light to assess the damage.
The mayor of Accumoli said a number of buildings had been badly damaged. “Four people are under the rubble, but they are not showing any sign of life. Two parents and two children,” Stefano Petrucci told RAI television.
RAI quoted police as saying four people were known to have died in the nearby village of Pescara del Tronto.

This is not the first time this region of Italy has been struck by a high intensity quake. Rieti, the epicentre of the quake, is only 60km from L’Aquila, where hundreds of people were killed in an earthquake in 2009.
More than 300 people died after a 6.3-magnitude tremor hit the capital of the mountainous Abruzzo region. The earthquake wrecked L’Aquila’s historic centre, injured more than 1,000 people and left tens of thousands homeless.

The disaster also sparked a long-running legal battle as a result of which some of Italy’s leading experts on natural disasters were convicted of giving false assurances about the risk of an earthquake in the region.
Three years after the quake, seven scientists from the National Commission for the Forecast and Prevention of Major Risks were found guilty of offering an unjustifiably optimistic assessment to the local population a week before the disaster. By then, the area had been hit by 400 tremors over a period of four months and a local researcher had warned of the risk of a major earthquake, largely on the basis of abnormal radon emissions.