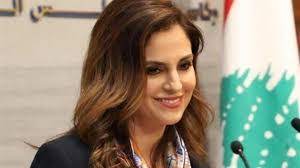 Caretaker Minister of Information, Dr. Manal Abdel Samad Najd, on Friday participated in the “Generation Equality Forum” virtual conference, during which she delivered a word affirming the Ministry’s commitment to the signed charter in the interest of gender equality.

Minister Abdel Samad called for destroying the social and gender stereotypes and rendering every female journalist a role model for the young generation to identify with.

Opening up her delivered word, Abdel Samad pointed out that the principle of equality between men and women has been the subject of centuries-old debate, adding that “gender stereotypes are at the core of this phenomenon.”

“Media outlets play a major role in combatting these stereotypes due to their  impact on citizens. If the Lebanese Ministry of Information is a signatory to the charter for the commitment of cultural and creative industries for equality between women and men, this is because the Ministry is convinced of the important role it can play in implementing this equality and in raising awareness against gender discrimination,” Minister Abdel Samad corroborated.

Abdel Samad added: “So far, several measures have been taken to ensure equality between men and women, and these measures are implemented on a dual level: Application of this equality within our institution, and raising awareness on equality through the media.”

Concretely, our commitments as a Ministry of Information to the charter signed in favor of gender equality, are as follows:

– Strengthening the implementation of the principle of equality between men & women within the Ministry (remuneration, recruitment, appointments, etc)

-launching an awareness campaign on the law relating to sexual harassment, particularly in the workplace (issued on December 21, 2020) through public and private media.

– Encouraging diversity of teams in television or radio production in public or private media.

– Encouraging the dissemination of programs that prompt victims of sexual violence or gender- based violence to speak out, and calling on the victims of harassment to come forward with their complaints to the concerned sides.