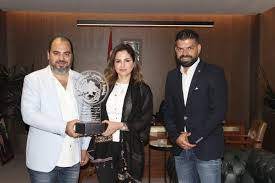 “The Government has been and continues to encourage sports, especially as it keeps young people away from all the harms of society, such as drug addiction, internet addiction, or even wasted time in cafes in a very unhelpful way,” Abdel Samad said.

She stressed the paramount importance of giving this issue its rightful share of attention, as this falls in the best interest of Lebanon’s youth.
Abdel Samad also requested the allocation of a considerable budget to athletes, “who purvey a beautiful image of Lebanon.”

For his part, Fahham indicated that he had discussed with Abdel Samad several ideas that involve care for older and forgotten athletes.

Lahham also regretted the martyrdom of athlete, Mohammad Atwi, who had been hit by a stray bullet.

“This sheds light on the issue of retired athletes, for whom the state should provide medical care, school aid, and other services,” Fahham added.