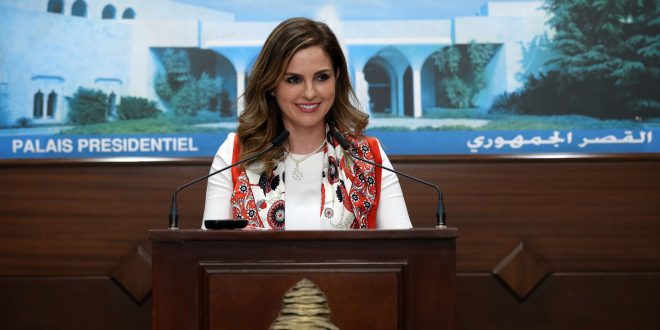 The Cabinet Friday postponed until next week the approval of key administrative appointments, having been held back by Parliament’s newly endorsed mechanism for Grade One postings.

The Cabinet session, chaired by President Michel Aoun at Baabda Palace, was held against the backdrop of tensions over the building of a power plant in northern Lebanon that had been voted down by ministers in a previous session.

“The Cabinet decided to postpone the appointments until next Thursday’s session due to deliberations because some ministers did not have all the information, and not because of specific names,” Information Minister Manal Abdel-Samad told reporters after the session. She cited the mechanism that was endorsed by Parliament as another reason for the delay in approving the appointments.

During a legislative session Thursday, Parliament endorsed a draft law on setting a mechanism for Grade One appointments in public administration, which would eliminate the ability of ministers to appoint civil servants. The Free Patriotic Movement opposed the law, calling it unconstitutional.

In the past, ministers used to propose candidates to fill vacant key posts in their ministries and the Cabinet would either approve, reject, or in the absence of consensus, vote on the proposed candidates.

The Cabinet was widely expected Friday to approve four senior administrative appointments. These are: the appointment of a new governor of Beirut to replace Ziad Shabib, whose term expired earlier this month; a new head of the Civil Service Council; a director-general of the Economy and Trade Ministry; and a director general of investment at the Energy Ministry. Local media said Judge Marwan Abboud, who is backed by the FPM, is tipped to be named new governor of Beirut.

Abdel-Samad said there were no appointments Thursday “because there are obstacles which we are trying to eliminate.” She added that Prime Minister Hassan Diab was seeking to reach consensus on the appointments.

Recalling that a ministerial committee had been tasked with exploring an appointment mechanism, Abdel-Samad said the Cabinet would discuss next Thursday a unified mechanism to be adopted in all administrative appointments.

A number of Lebanese Forces MPs Friday called on the Cabinet to postpone the appointments and adopt the mechanism endorsed by Parliament for Grade One postings.

“Now that the Grade One appointment mechanism has been approved by Parliament, the government must postpone the appointments and adopt this mechanism, or else it will be seen as carrying out a nonreformist practice and a quota approach which the Lebanese had hoped we will put a final end to it by adopting competence,” LF MP George Adwan tweeted.

Among other decisions, Abdel-Samad said the Cabinet approved the Foreign Ministry’s request to extend for one year the mandate of the UN peacekeeping force in south Lebanon, UNIFIL, which expires on Aug. 31.

Speaking at the beginning of the Cabinet session, Aoun asked ministers to rethink the decision taken in a previous session relating to an electricity plan that underlined for the need to build three power generating plants in order to ensure a 24-hour electricity supply. This follows a reported request from Aoun’s son-in-law and FPM leader Gebran Bassil to intervene in the issue.

“Proceeding with this plan is a must for Lebanon and also for the negotiations with international institutions,” Abdel-Samad quoted Aoun as saying. He was referring to Lebanon’s ongoing negotiations with the International Monetary Fund on a financial aid program to pull the country out of its worst economic and financial crisis in decades.

As a way to defuse tension with Aoun over the building of a third power plant, Diab said during the session the government was committed to the policy statement concerning an electricity plan adopted by former Prime Minister Saad Hariri’s government that called for the building of three power plants in Zahrani, Deir Ammar and Selaata, the state-run National News Agency reported.

“The Cabinet considers that the Cabinet decision on May 14, 2020, comes in the context of implementing the electricity plan without contradicting it,” Abdel-Samad quoted Diab as saying.

Energy and Water Minister Raymond Ghajar, who belongs to the FPM, said after the Cabinet session: “Agreement has been reached to implement the electricity plan as it was contained in the [government’s] policy statement and it includes the Selaata plant.”

Hariri’s government approved a plan to build three new power plants, with the northern village of Selaata being the location of one of them. The other two are to be built in Zahrani in the south and Deir Ammar in the north.

During its session chaired by Diab at the Grand Serail on May 14, the Cabinet, as part of its plan to resolve the long-running electricity problem, approved the Energy and Water Ministry’s request to negotiate understandings with companies interested in building power plants in Lebanon.

Abdel-Samad said at the time that the plan’s first phase calls for building an electricity plant in Zahrani and the second phase for constructing a power plant in Deir Ammar. Asked about the Selaata plant, she said this project would come at a later stage.

All ministers except for those from the FPM supported the Zahrani and Deir Ammar plants while they voted down the Selaata plant proposal at the May 14 session. The FPM has held the Energy Ministry for more than 12 years.

Diab briefed the Cabinet on Friday’s tour of the northern and eastern Bekaa Valley region, where he was informed by senior military officers on measures taken by the Army to close illegal border crossings used for contraband smuggling between Lebanon and Syria.

“In principle, we can say that the measures should lead to controlling the smuggling operations on a large scale. We need to continue efforts in order to close this file,” Diab said during the session.

Earlier in the day, addressing soldiers at the Elias al-Khoury Barracks in the eastern border town of Ras Baalbeck, Diab said the Lebanese Army would step up its efforts to put an end to cross-border smuggling with Syria.

He vowed to “pursue efforts to stop smuggling by closing the illegal crossings that cause great damage to the state and benefit a handful of smugglers.”

He affirmed that the country’s borders “will remain hard to break because of the Army’s protection.” Diab stressed that the Lebanese Army is the country’s hope for “guarding civil peace, protecting security, and imposing the state’s authority.”

The council decided to intensify monitoring measures along the border, to oversee the activity of fuel and wheat cargo shipments and to issue fines if smuggling occurs.