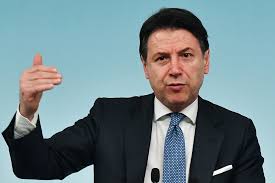 The European Union faces an existential threat if it cannot come together to combat the coronavirus crisis, Italy said on Thursday as the divided bloc sought to salvage talks on a rescue package to aid battered economies.

A deal has so far proved elusive amid fraught discussions between the more fiscally conservative north and the indebted south, which has been hit hard by the pandemic and is pushing for unprecedented measures like issuing joint EU debt.

Sixteen hours of talks between EU finance ministers on a half-a-trillion-euro package collapsed on Wednesday. They were due to resume at 1500 GMT on Thursday to push for a deal to help governments, companies and individuals through a deep recession the pandemic is expected to cause in Europe this year.

“It’s a big challenge to the existence of Europe,” Italy’s Prime Minister Giuseppe Conte told the BBC. “If Europe fails to come up with a monetary and financial policy adequate for the biggest challenge since World War Two, not only Italians but European citizens will be deeply disappointed,” he said.

For weeks, the EU has struggled to show a united front in the face of the pandemic, with the 27 member states squabbling over economic rescue plans, medical supplies and border curbs.

France and Germany are pushing for a compromise to break the deadlock, but budget hawk Austria said that, while it was willing to make concessions, the contentious “euro bonds” remained a no-go for Vienna.

“That is out of the question for us,” said Finance Minister Gernot Bluemel.

A senior EU diplomat said the risk was growing that the finance ministers would just patch up divisions for the sake of announcing a deal, but would leave the key unresolved issues to national leaders.

“There is a lot of pressure for an agreement today,” said the diplomat. “Germany and France are pushing for it. But it’s not easy … we may be heading for a formal agreement that doesn’t really solve much in practice.”

The package under discussion would bring the EU’s total fiscal response to the epidemic to 3.2 trillion euros, the biggest in the world. But it includes contentious elements that expose deep divisions among countries on sharing the financial burden of crises, bringing back bitter disputes and mistrust from the sovereign debt crisis of 2010-2012.

Another problem is agreeing conditions under which euro zone governments could access cheap credit from the euro zone bailout fund, the European Stability Mechanism (ESM).

Italy, and most other countries, is ready to accept very light conditions, but the Netherlands wants stricter rules, including country-specific economic criteria, which is politically unacceptable for Rome.

“It’s important that we take this decision today on the 500 billion euros that is in discussion – that’s an incredibly large sum of money that we could use to help a lot of people, especially in the hardest hit countries, Spain and Italy,” German Economy Minister Peter Altmaier said.

Other elements of the package being discussed are more guarantees for the European Investment Bank to back up companies and a scheme to help subsidise wages across the bloc so that companies can cut work hours, not jobs.

But a separate plan to finance the recovery, after the epidemic, raises more questions. France and the southerners wants the money – possibly up to 3% of EU GDP, or more than 400 billion euros – to be borrowed jointly on the market by all EU states.

This is a red line for Germany, the Netherlands, Finland and Austria which strongly oppose joint debt issuance, even in such an emergency as the coronavirus pandemic.

The ministers might end up side-stepping the problem by just mentioning the need for a recovery fund and asking the 27 national leaders of the bloc to decide on how to finance it.