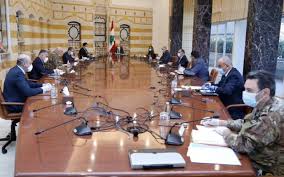 President of the Republic, General Michel Aoun, chaired a security ministerial meeting, today at the Presidential Palace, devoted to address the security situation in the country and evaluating the measures taken.

At the beginning, President Aoun asserted the need to continue to strengthen security measures in the country and coordination between the military and security apparatuses, noting the efforts made by the security forces in all their assigned tasks.

Then PM Diab stressed the importance of pre-emptive security and the steps that must be taken in this field to ensure stability and safety for all Lebanese citizens and residents.

Then, the leaders of the security apparatuses presented available reports on the current situation, and the tasks carried out by the military and security forces.