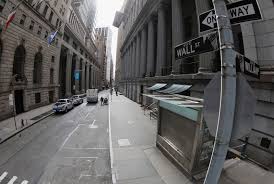 International trade has dried up as a result of the Covid-19 pandemic and could be on course for a collapse as severe as that of the 1930s Great Depression, the World Trade Organization has said.

The Geneva-based WTO, responsible for policing the global trading system, said even the most optimistic scenario for 2020 was that trade would shrink by 13%, a bigger drop than in the 2008-09 recession caused by the banking crisis.

But it warned there was the risk of a much gloomier outcome under which trade would shrivel by 32%, on a par with the reduction seen between 1929 and 1932.

The collapse in global trade during the 1930s was in part due to the protectionist measures imposed by developed countries, and the head of the WTO, Roberto Azevêdo, warned that putting up barriers in response to Covid-19 would make matters worse.

“These numbers are ugly – there is no getting around that. But a rapid, vigorous rebound is possible. Decisions taken now will determine the future shape of the recovery and global growth prospects,” Azevêdo said.

While not mentioning any country by name, the WTO director general made it clear that an end to the trade tension between the US and China would help minimise the fallout from the pandemic.

“We need to lay the foundations for a strong, sustained and socially inclusive recovery. Trade will be an important ingredient here, along with fiscal and monetary policy.

“Keeping markets open and predictable, as well as fostering a more generally favourable business environment, will be critical to spur the renewed investment we will need. And if countries work together, we will see a much faster recovery than if each country acts alone.”

The WTO said trade had already been slowing ahead of the Covid-19 outbreak.

In its outlook, the WTO said it expected a recovery in trade next year but that it was hard to say how vigorous the bounceback would be. The outcome would depend largely on the duration of the outbreak and the effectiveness of policy responses.

“This crisis is first and foremost a health crisis, which has forced governments to take unprecedented measures to protect people’s lives,” Azevêdo said.

“The unavoidable declines in trade and output will have painful consequences for households and businesses, on top of the human suffering caused by the disease itself.”

“The immediate goal is to bring the pandemic under control and mitigate the economic damage to people, companies and countries. But policymakers must start planning for the aftermath.”