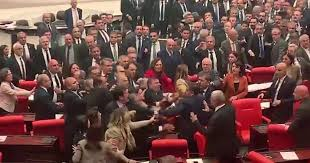 Brawl breaks out in Turkey’s parliament over Syria involvement, Erdogan meets with Putin

A shoving match erupted inside Turkey’s parliament Wednesday over the country’s continued involvement in northwest Syria.

Video from inside the chambers showed dozens of legislators from President Recep Tayyip Erdogan’s party and the main opposition party throwing punches at each other while others tried to pry the brawling lawmakers apart.

According to the Associated Press, the brawl began when Engin Ozkoc of the opposition Republican People’s Party, took over the podium.

In an earlier news conference, Ozkoc accused Erdogan of being “dishonorable, ignoble, low and treacherous.”

These were the same words that Erdogan used to describe the opposition during a speech to members of his party earlier Wednesday.

Ozkoc also accused the president of sending the children of Turkey’s people to fight while Erdogan’s own offspring avoided long-term military service.

Mustafa Sentop, the speaker of parliament, condemned the remarks made by Ozkoc, while prosecutors have launched an investigation into a suspected insult of the president, local media reported.

Tensions are running high following the deaths of more than 50 Turkish soldiers in Idlib in the past month, including 33 who were killed in an attack on Thursday.

Meanwhile, Erdogan was in Moscow on Thursday to hold talks with Russian President Vladimir Putin, aimed at ending the hostilities in northwestern Syria.

Both Russia and Turkey appear eager to avoid a showdown, but the sharply conflicting interests in Idlib province make it difficult to negotiate a mutually acceptable compromise.

The fighting in Idlib comes as the most severe test to Russia-Turkey ties since the crisis triggered by Turkey’s downing of a Russian warplane near the Syrian border in November 2015. Russia responded with an array of sweeping economic sanctions, cutting the flow of its tourists to Turkey and banning most Turkish exports — a punishment that eventually forced Turkey to back off and offer apologies.

A possible compromise on Idlib could see Syrian President Bashar Assad retain control of the key M5 highway, which his forces claimed in the latest offensive. The road that spans Syria linking Damascus with Aleppo, the country’s commercial capital, is essential for Assad to consolidate his rule.

In a sign that the Kremlin firmly intends to secure control of the M5, earlier this week Russian military police have deployed to a strategic town of Saraqeb sitting on the highway to ward off any Turkish attempt to retake it.

In return, Putin could accept the presence of Turkey-backed militants in the areas alongside the border and put brakes for now on Assad’s attempts to claim full control over Idlib.