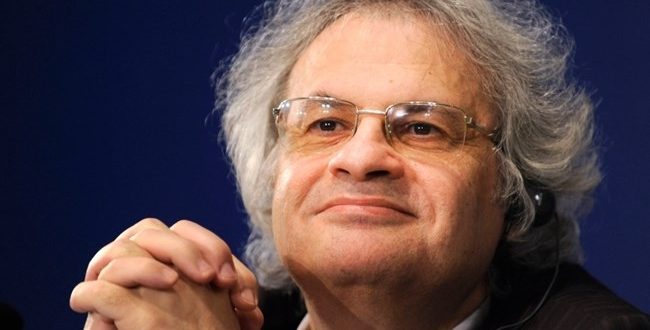 Lebanese-born French novelist Amin Maalouf was awarded the National Order of Merit by the French government Saturday, in a ceremony led by French President Emmanuel Macron.

The 71-year-old was elevated to the title of grand officer, the second highest status of the merit, just one rung below the Grand Cross.
Established in 1963, title celebrates those who “represent the civic spirit of France,” honoring acts of merit, commitment and devotion to serving France.

Prime Minister Hassan Diab was quick to congratulate Maalouf and commend Lebanese achievements being recognized abroad, reflecting “the true and civilized image of Lebanon,” in a statement released on Twitter.

“We express our pride following the news and congratulate Mr. Maalouf,” Diab’s statement read, “and reiterate that this award only makes us more determined to work hard to face the challenges and restore the bright image of Lebanon that all Lebanese are proud of.”
Born in Badaro, in 1949, Maalouf worked as the director of An-Nahar newspaper until 1976, when he and his family moved to Paris.

Originally written in French, Maalouf’s novels have been translated into over 40 languages and he already holds the 1993 Prix Goncourt for his novel “The Rock of Tanios,” as well as the 2010 Prince of Asturias Award for Literature.

Among his most celebrated works was his debut 1986 novel “Leo the African,” written in the form of a memoir – the plot follows the historical fictional adventures of the restless 16th-century traveler Hassan al-Wazzan, a geographer who roamed Africa.

“Samarkand,” published in 1988, recreated the life of the Persian poet Omar al-Khayyam and his famous collection of poetry “Rubaiyat” in 11th-century Persia.
His nonfiction works have also garnered attention. His 1983’s “The Crusades Through Arab Eyes,” a look at how the Crusades affected Arab and Islamic societies, and “On Identity,” published in 1998, which tackles the concept of West verses East, are two of his most-discussed publications.