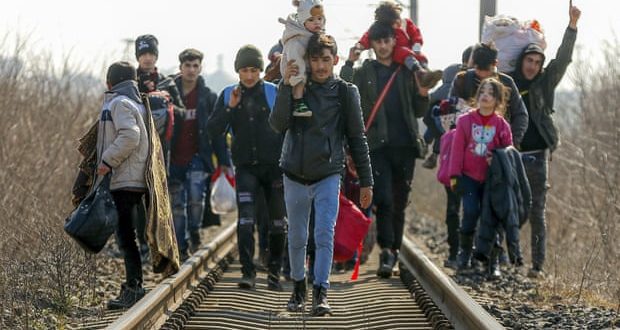 Clashes as thousands gather at Turkish border to enter Greece

Migrants trying to reach Europe have clashed violently with Greek riot police as Turkey claimed more than 76,000 people were now heading for the EU as a result of President Recep Tayyip Erdoğan’s decision to open the Turkish side of the border.

Officers fired teargas at the migrants, some of whom threw stones and wielded metal bars as they sought to force their way into Greece at the normally quiet crossing in the north-eastern town of Kastanies.

As the situation escalated, Turkey’s interior minister, Süleyman Soylu, fueled the anxiety in Greece and Bulgaria, which also shares a border with Turkey, by tweeting on Sunday morning that 76,385 refugees had left his country through Edirne, a province bordering the two EU member states. He provided no evidence pto support the claim.

The UN’s International Organization for Migration had said earlier in the day that at least 13,000 people had gathered by Saturday evening at the formal border crossing points at Pazarkule and İpsala, among others, in groups of between several dozen and more than 3,000. The majority were said to have been from Afghanistan.

Greek police confirmed that at least 500 people had arrived by sea on the islands of Lesbos, Chios and Samos near the Turkish coast within a few hours.

The Greek government said on Sunday evening that it would suspend EU asylum law to implement summary deportations over the next month, a fix allowed within the treaties.

Earlier in the day the government in Athens had sent a mass text message to all international numbers in the border region appealing for people to stay away. “From the Hellenic Republic: Greece is increasing border security to level maximum,” read the message in English. “Do not attempt illegally to cross the border.”

The EU’s border protection agency, Frontex, said it was on high alert and had deployed extra support to Greece, as the country’s prime minister, Kyriakos Mitsotakis, held a meeting of his national security council.

“We … have raised the alert level for all borders with Turkey to high,” a Frontex spokeswoman said. “We have received a request from Greece for additional support. We have already taken steps to redeploy to Greece technical equipment and additional officers.”

The Greek government accused Turkey of orchestrating a “coordinated and mass” attempt to breach the country’s borders by encouraging thousands of asylum seekers to illegally cross them.

Mitsotakis said he would visit the land border Greece shares with Turkey along the Evros river alongside Charles Michel, the European Council president, on Tuesday. “Once more, do not attempt to enter Greece illegally – you will be turned back,” Mitsotakis said after the national security council meeting.

Along the north-eastern mainland border, some people waded across a shallow section of the Evros river to the Greek side. Witnesses said there were groups of up to 30, including an Afghan woman with a five-day-old infant.

The deaths came as fighting in north-west Syria between Turkish-backed rebels and Russian-backed Syrian government forces escalated, raising the risk of the two regional powers being brought into direct confrontation.

The Turkish president had repeatedly said he would break his country’s deal with Brussels to prevent migrants entering the EU unless he received greater support from the 27 member states for his intervention in Syria.
Erdoğan said in a speech on Saturday that he had no intention of rethinking his decision. “What did we say? If this continues, we will be forced to open the doors,” he told a meeting of the ruling Justice and Development party.
“They did not believe what we said. What did we do yesterday? We opened our border. The number of people crossing the doors to Europe reached around 18,000 by Saturday morning, but today the number could reach 25 or even 30,000, and we will not close the passages during the period to come.”
The EU has insisted it expects Ankara to abide by a €6bn (£5.2bn) deal signed in 2016, under which Turkey agreed to halt the flow of people to the EU in return for funds. Turkey hosts about 3.6 million refugees from Syria.

The European council president, Charles Michel, spoke to Erdoğan on Saturday. “The EU is actively engaged to uphold the EU-Turkey statement and to support Greece and Bulgaria to protect the EU’s external borders,” he said in a statement.

The Kremlin said on Sunday that it hoped Vladimir Putin and Erdoğan would hold talks in Moscow on Thursday or Friday. Istanbul police released Mahir Boztepe, the editor-in-chief of the Turkish edition of Sputnik, the Russian news website, on Sunday.

Boztepe had been held for two hours as part of what the Ankara public prosecutor’s office said was an investigation into whether Sputnik had been involved in “degrading the Turkish people, the Turkish state, state institutions” and “disrupting the unity and territorial integrity of the state”.