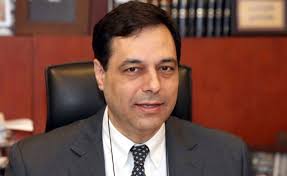 Lebanon’s new prime minister said Wednesday that there were ways out of the economic and financial crisis that the country was facing after he held a number of meetings with ministers and senior World Bank officials. Prime Minister Hassan Diab headed a number of meetings in Beirut Wednesday where he asked ministers and banking officials to draft a road map out of the current crises.

This economic vision is expected to be the main foundation on which Diab’s government’s policy statement will be built upon.

Later in the day, Diab also met with a delegation from the World Bank headed by the regional director for the Middle East Department Saroj Kumar Jha.

The premier said that the workshop aimed to establish the financial issues the country was facing.

“This workshop is a complementary part in the drafting of the policy statement because it should be the basis of the statement … due to the delicacy of the current phase as well as the different forms of the financial crisis and its consequences,” Diab said at the workshop’s opening session.

“The situation cannot handle theories and experiments and so we should have a scientific and realistic vision,” he added, according to a statement from his office.

Diab’s government that was formed last Tuesday is seeking a vote of confidence from Parliament. A ministerial committee was formed whose task is to draft the statement that Diab will present before lawmakers during a Parliament session. Citing Salameh and Sfeir, Diab said that prospects for a solution to the country’s economic difficulties are present. Despite recognizing that the solution would not be easy, he said the negative atmosphere surrounding the situation “is not true [but also] is inaccurate.”

“But the persisting impression in the country [led people] to lose trust in the state, the Central Bank and the banking sector,” the prime minister said.

In an attempt to regain some of this lost trust, Diab said he requested that work should be focused on an economic plan in cooperation between the government, BDL and ABL.

During the meeting, Salameh presented information about the financial situation in the country, according to the statement. Lebanon is facing one the worst economic crises that hit the country since the end of the 1975-90 Civil War, that has shaken confidence in banks and raised concerns over its ability to repay one of the world’s highest levels of public debt.

The marathon meetings at the Grand Serail came two days after Parliament passed the 2020 state budget.

The new budget aims to reduce deficit to around 7 percent of GDP, Parliament’s Finance and Budget Committee Chairman MP Ibrahim Kanaan said. However, he admitted that this would be difficult to reach. That would be only a tiny drop from the planned deficit of almost 7.6 percent of GDP for last year, after a shortfall of 11.2 percent in 2018.
The economic situation was one of the main reasons hundreds of thousands of Lebanese took to the streets on Oct. 17 to denounce the situation and the squandering of public money. Protesters have also called for the fall of the ruling class.
The nationwide anti-government protests prompted Saad Hariri to resign as prime minister, which paved the way for Diab’s designation.

President Michel Aoun Wednesday said that the security situation in the country was relatively stable after the protests.

Speaking before a delegation from the Maronite League, Aoun said that after the security situation is maintained, focus should be shifted to the economic status.
“The economic financial crisis remains the most dangerous,” Aoun said. “We are in the process of resolving [this] difficult situation and the measures that will be taken will be harsh … which requires people’s understanding.”

Separately, Speaker Nabih Berri told lawmakers that after Parliament endorsement of the budget Monday, it would continue with its institutional work by holding a vote of confidence session for the new government. Berri said that Parliament would cooperate and would practice its legislative role, ensuring that the economic and monetary reforms are well implemented.

“The rescue operation is not impossible, and it is also not difficult,” Berri said during his meeting with lawmakers.
“After gaining confidence, the government has three to four months’ chance,” he said, adding that this was contingent on the government’s ability to stay away from bickering and tension. “Lebanon cannot progress through sectarian practices, rather through preserving [state] institutions.”