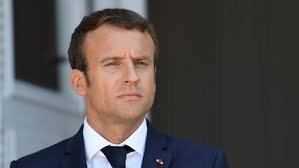 French President Emmanuel Macron over the weekend congratulated President Michel Aoun on the formation of a new government and reiterated his country’s support for Lebanon.

Speaking over the phone to Aoun Saturday, Macron expressed his hope that the new government will work to fulfill the aspirations of the Lebanese, according to a statement from the presidency. He said that France will stand by Lebanon’s side “in order to preserve the country’s unity and stability.”

Macron emphasized the need to implement the reforms that Lebanon agreed to introduce at the 2018 CEDRE conference in Paris. Carrying out those reforms will unlock the $11 billion in soft loans and grants pledged by international donors at the conference.

Aoun thanked the French president for the interest he has shown in Lebanon’s situation, briefing Macron on the country’s current condition. Aoun, the statement said, assured Macron that work is underway to address the country’s spiraling economic crisis. He said the new government’s work will serve the interests of the Lebanese people and their unity.

Prime Minister Hassan Diab formed a 20-member Cabinet last Tuesday, just over a month after his appointment as premier on Dec. 19.

The government formation came against the backdrop of nationwide anti-government protests calling for a change in the ruling class and an end to corruption in the country.

The French Foreign Ministry said Thursday that the priority of Lebanon’s new Cabinet must be to meet the expectations of protesters and return confidence. “A new Lebanese government has been formed, and its essential role must be to respond to the economic, social and political expectations expressed by the Lebanese people since Oct. 17 and face Lebanon’s deep crisis,” a statement from the ministry said.

The ministry said the “difficult situation” that Lebanon is going through requires the government to prioritize confidence-restoring measures, such as fighting corruption, addressing the deteriorating economy and creating an independent judiciary.