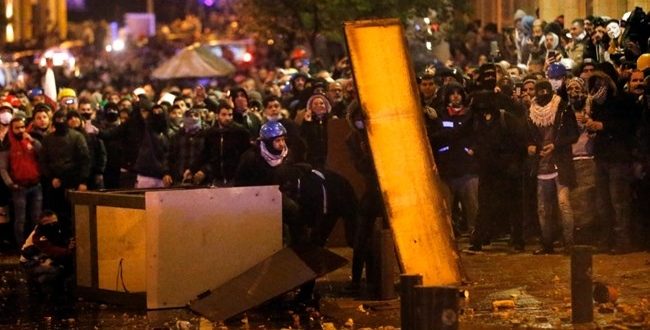 Despite a surge in violent clashes between protesters and security forces in Beirut over the weekend that threatened to plunge the country into turmoil and chaos, the formation of a new government remained stalled Sunday over the representation of some parties. The weekend’s clashes, in which riot police fired tear gas, rubber bullets and water cannon to disperse rioting protesters in Downtown Beirut, were the worst since hundreds of thousands of Lebanese took to the streets on Oct. 17 in an unprecedented popular uprising against the country’s ruling political elite who they deem corrupt and incompetent. Nearly 500 people from both sides were injured in two days of confrontations.

However, the formation of an 18-member government made up of specialists remained deadlocked over two hurdles after two other obstacles were resolved: The representation of the Marada Movement and the Syrian Social Nationalist Party, which are allied with Hezbollah.

Prime Minister-Designate Hassan Diab met Sunday with President Michel Aoun to brief him on the outcome of his ongoing talks with various parties to form the next government. He presented Aoun with a new Cabinet lineup in an attempt to break the monthlong deadlock.

Aoun and Diab discussed the “current situation and latest developments in light of ongoing contacts to form a new government,” the state-run National News Agency reported.

Aoun is set to chair a security meeting at Baabda Palace at noon Monday to discuss “security developments and measures that need to be taken to preserve stability and calm in the country” following the clashes between protesters and security forces in the Downtown Beirut district. The meeting will be attended by caretaker Defense Minister Elias Bou Saab, caretaker Interior Minister Raya El Hassan, and commanders of military and security agencies, it added. Diab left Baabda Palace after the meeting that lasted 90 minutes without making any statement, a clear indication that there were still hitches hindering the government formation.

“The meeting was good. It laid down the foundations for resolving the remaining hurdles in preparation for the announcement of the government formation in the coming hours,” a source at Baabda Palace told The Daily Star Sunday night.

“There are two hurdles that need to be sorted out: The representation of the Marada Movement and the SSNP,” the source said. The source added that Diab went straight to meet with Parliament Speaker Nabih Berri after his talks with Aoun in a bid to resolve these two obstacles.

“If these obstacles were resolved tonight [Sunday night], then the government could be announced tomorrow [Monday],” the source said.

But a source close to Berri told The Daily Star that no progress was made in Diab’s talks with the speaker to resolve the problem of the Marada and SSNP representation. The source said that Diab had also met with Berri before he had talks with Aoun.

Marada Movement leader and former MP Sleiman Frangieh is demanding another ministry, in addition to the Public Works portfolio that is allotted to the Marada in the 18-member government.

Amid media reports that the Marada Movement had decided to stay out of the government, Frangieh is set to talk about his party’s participation in the Cabinet at a news conference Tuesday after having postponed it from Saturday. Frangieh, an archfoe of caretaker Foreign Minister Gebran Bassil, was reported to have accused Bassil of naming all the Christian ministers in the new government. Similarly, the SSNP, which has a three-member bloc in the 128-member Parliament, is demanding a ministerial post in the government.

The SSNP, backed by Diab, wants the Economy Ministry to be allotted to Amal Haddad, the former head of the Beirut Bar Association, while the Free Patriotic Movement, backed by Aoun, has proposed Ayman Haddad, an economist, for the economy portfolio.

According to the Baabda source, the Catholic sect would be assigned one ministry instead of two as it had demanded.

The problem of representing the Druze sect has been solved by allotting two ministries, including the industry portfolio, to one Druze minister, the source said.

MP Talal Arslan, head of the Lebanese Democratic Party, has specifically called for the Industry Ministry, in addition to another ministry representing the Druze sect.

Arslan’s Druze rival, Walid Joumblatt, leader of the Progressive Socialist Party, has said his party’s bloc will not participate in the next government. Neither will the blocs of the Future Movement, the Lebanese Forces and the Kataeb Party, leaving Diab with the choice of forming a “one-sided” government that represents only the FPM, the Amal Movement, Hezbollah and their allies.

Diab has rejected requests by the FPM, the Amal Movement and Hezbollah, which nominated Diab to form a new government, to increase the number of ministers to 20 or 24, insisting on an 18-member government.

Earlier Sunday, caretaker Prime Minister Saad Hariri said the way to defuse escalating tensions in the streets was to “stop wasting time” and move forward with government formation. “There is a way to calm the popular storm. Stop wasting time, form a government and open the door to political and economic solutions,” Hariri said via Twitter.

“To keep the Army, security forces and protesters in a state of confrontation is to revolve around the problem, rather than solving it,” he added.

Joumblatt criticized the clashes that engulfed Beirut. “Beirut does not deserve this treatment that carries with it a semi-destruction of the city. Only a dialogue among political parties should prevail whatever the differences are,” Joumblatt tweeted. While supporting peaceful demonstrations, the PSP leader rejected the use of violence by any group.

The Cabinet impasse comes as Lebanon is grappling with the worst economic and financial crisis since 1975-90 Civil War. The Lebanese pound, officially pegged to the U.S. dollar, has lost as much as 40 percent of its value on the black market. Amid a dollar liquidity crunch, individual banks have imposed informal capital controls, thousands of jobs have been lost and many businesses shuttered.