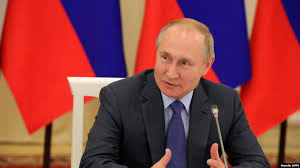 Russian President Vladimir Putin said on Monday he wanted changes to the Ukrainian constitution to give a special status to the Donbass region after the first bilateral talks with his Ukrainian counterpart in Paris.

Putin, who said the meeting in Paris had been useful, said he needed more points of passage between front lines in eastern Ukraine for civilians and the implementation of an amnesty for people involved in the conflict.