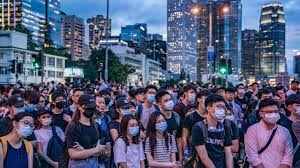 After months of sometimes-violent unrest in Hong Kong, an election with record turnout handed a big victory to pro-democracy local district council candidates, posing a new conundrum for Beijing and adding pressure on the city’s leader.

In the run-up to the citywide elections on Sunday, extreme clashes had broken out between riot police and anti-government protesters who had barricaded themselves in several universities.

The standoffs were stoked in part by the death of a protester after a fall, and the shooting of another by a policeman at point-blank range.

Yet on Sunday, amid a rare lull, nearly three million people – about three-quarters of eligible voters – queued on a crisp, cerulean autumn day to exercise their democratic rights, with pro-democracy candidates ultimately winning nearly 400 of the 452 seats.

In the last election, four years ago, they won just 100.

“Most people think the extra one million voters came out to send a political message to the government, that they still support the protesters and they’re dissatisfied with the government,” said Chinese University political scientist Ma Ngok.

“The government and the pro-Beijing camp have always claimed they have public support,” Ma added. “But now … this is a big slap in the face because the public has showed their real position in record numbers.”

Hong Kong’s leader Carrie Lam said in a statement she respected the result and that her government “will listen to the views of the public with an open mind and with serious reflection,” without offering specifics.

“The HKSAR Government will listen to the opinions of members of the public humbly and seriously reflect,” the statement said, referring to the city’s formal name, the Hong Kong Special Administrative Region.

District councillors lack political heft and deal largely with livelihood issues. But taken as a bloc across Hong Kong, with their own offices, funding and networks, some say they provide the democrats with an extra lever with which to influence policies, even as the protests rumble on.

Lo Kin-hei, a pro-democracy district councilor who was re-elected, said the vote was in effect a “vote of no-confidence” in the political establishment, including Hong Kong’s leader, Carrie Lam, and key Chinese officials such as Zhang Xiaoming, head of the State Council’s Hong Kong and Macau Affairs Office.

Lo says that district councillors, with around HK$1 million ($127,797) in funding each year, could provide resources to help the “protest movement’s momentum to be sustained.”

In the pro-Beijing camp, there were soul-searching and bows of apology from leaders of the main DAB political party, with leader Starry Lee offering to resign.

Ng called on the government to respond with effective policies to “address the deep splits in society,” and for effective measures to end the violence.

Lam’s room to maneuver, however, remains “very limited”, according to a voice recording obtained by Reuters this summer, though she has stressed a need to first end the violence and halt the chaos.

Some observers said she would now face more pressure to respond to the protesters’ demands, which include democratic reforms and an independent inquiry into allegations of police brutality.

Police tactics in dealing with the protests have been widely seen as one of the major drivers for the clashes. But the government has so far said existing police oversight mechanisms are sufficient to handle complaints.

Hong Kong returned to Chinese rule in 1997 amid the promise of a high degree of autonomy, though the erosion of freedoms by China have stoked broader resentment and fueled the current political crisis.

The likelihood of Beijing offering any new concessions in the short term remains slim, observers say, given the tough line taken so far.

Of the protesters’ key demands, the government has so far only responded to one: In September, it formally withdrew the extradition bill that sparked the first protests.

China’s top legislature said last week that Hong Kong courts have no power to rule on the constitutionality of legislation under the city’s Basic Law, a day after Hong Kong’s High Court had ruled a controversial ban on wearing face masks was unconstitutional.

Many council districts long dominated by pro-Beijing forces supported by China’s United Front struggled against an unprecedented voter turnout of over 70 percent.

The vote underscores a deep pool of support for the protest movement, despite occasional violence by protesters.

Many voters said they wanted to punish the pro-Beijing camp for backing the extradition bill despite a mass airing of public concerns.

Although some pro-Beijing heavyweights were toppled by relative newcomers, the DAB’s Lee says her party will regroup for key legislative council elections next September.

But some observers say Beijing may see an advantage in replacing Lam before then so she does not become an electoral liability.