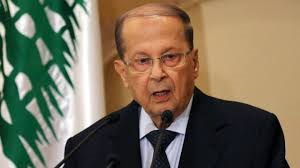 President Michel Aoun  said that he might call for parliamentary consultations to name a new premier on Thursday or Friday if the parties concerned respond positively to the proposals, as he warned protesters against continued blocking of roads and state institutions.

“The consultations might be held Thursday or Friday pending the answers of the parties concerned and if they don’t respond, we’ll have to postpone for a few more days,” Aoun said in a TV interview broadcast on all local channels.

“We have resolved most obstacles,” he said, adding that “the protest movement must have a say in the new government.”

On the nature of the new government, the president said: “We cannot form a ‘shock government’… A purely technocratic government cannot decide the country’s policies.”

“I back the formation of a government equally composed of politicians and technocrats,” he added.

Asked about Lebanese Forces chief Samir Geagea’s insistence that the new ministers must be totally independent, the president said: “Where can I find them? On the moon?”

As for the negotiations with caretaker Prime Minister Saad Hariri, Aoun said Hariri was “hesitant” during their latest meeting.

“He has personal reasons,” the president added.

Addressing protesters, Aoun warned: “I tell the Lebanese that their behavior should not be always negative because this would lead to counter-negativity and we would definitely reach an inter-Lebanese clash.”

Asked about the first measures that must be taken after the formation of the new government, the president said: “The return of citizens to their homes so that the cycle of life can return to normal and let the government work in light and not in darkness.”

“The country will die if protesters remain on the streets, even if we don’t use any force against them,” Aoun cautioned.

As for the financial and monetary crisis in the country, Aoun reassured the Lebanese and told them “not to rush to banks and worsen the problem.”

“Their money is secure and we will solve the crisis,” he added.

He also warned that banks that smuggle funds outside Lebanon “will be held accountable.”…