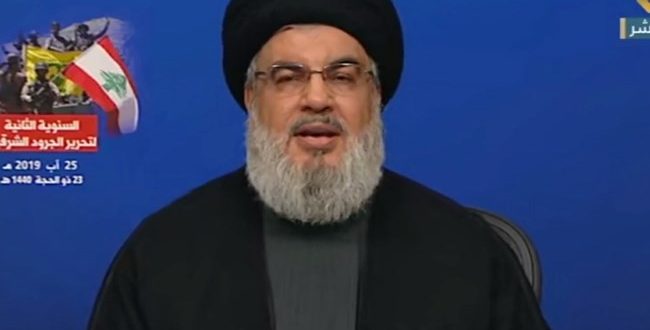 Fighting corruption should be Lebanon’s priority, Hezbollah leader Sayyed Hasan Nasrallah said Monday, saying the party was ready to cooperate with the judiciary in cases involving its members.

“If there is any case related to a Hezbollah official, I urge you to start with us, and I guarantee Hezbollah’s respect,” Nasrallah said, addressing the Higher Judicial Council during a televised speech on the 26th day of widespread protests.

The protests, which broke out Oct. 17, caused the government to fall on Oct. 29. With politicians in disarray, President Michel Aoun has yet to make any move to form a new government.

Nasrallah made sparse comments on the topic. “When it comes to the government formation … the meetings are ongoing and the discussions are underway in the country,” he said. “I will not discuss this matter … and we will leave the door open.”

The Hezbollah leader said that there had been many different demands put forward by protesters over the more than three weeks of demonstrations, but claimed that the main united demands were fighting corruption and returning looted public funds.

“After what has happened, no one can protect a corrupt person,” Nasrallah said.

He called on the Lebanese judiciary to shoulder its responsibilities and prosecute any current or former public official if they are found to be guilty of corruption.

“We need a judiciary that is brave, strong and does not bow to political pressure,” he added.

Lebanon’s judiciary has been harshly criticized by activists and experts for being systematically subservient to powerful politicians.

Nasrallah then briefly addressed Lebanon’s financial situation, describing it as “delicate.” The country is going through its worst financial crisis since the Civil War (1975-1990), with a shortage of dollars leading most recently to dwindling gas supplies.

The Hezbollah leader placed blame on the U.S. for its deterioration, both through sanctions and deliberate attempts to deter investment.

He claimed the U.S. was preventing Chinese, Russian and Iranian companies from investing in projects in Lebanon.

“Why shouldn’t we accept Chinese help, if it could save our country?” he asked.

The U.S., under the administration of President Donald Trump, has been engaged in a trade war with China since 2018, when Washington began imposing higher trade tariffs on Chinese goods.

He said that they discouraged potential investors and had a negative impact on the Lebanese economy, but nevertheless would have little effect on his party, whose money, he claimed, was not in the banks.

Instead, sanctions would simply cause “sedition” among the Lebanese people, he said.