Home / Economy / Central Bank Governor Reassures the Lebanese: We Have Taken Measures to Protect Depositors from Any Losses 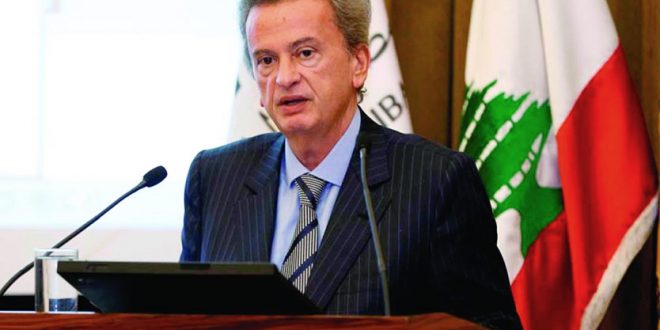 Central Bank Governor Reassures the Lebanese: We Have Taken Measures to Protect Depositors from Any Losses

Lebanese Central Bank Governor, Riad Salameh, pledged Monday that BDL’s (Banque du Liban) main objective is to protect depositors and deposits, underlining that “this is a basic and final matter, and we have taken the necessary procedures so that there will be no losses borne by depositors.”

Addressing the Lebanese public in a televised press conference, Salameh said: “We have informed banks that they can borrow from the Central Bank in dollars. However, these funds are not to be transferred abroad but are solely meant for Lebanese local use.” He added reassuringly that the Central Bank has not intention whatsoever of implementing a capital control policy.

Salameh indicated that Lebanon has been through many stages, during which the exchange rate of the Lebanese Lira was successfully maintained, and vowed to continue to defend the currency peg.

“From the outset of 2015, we have faced sanctions that have impacted the flow of funds to Lebanon, whereby we adopted the necessary measures to keep Lebanon engaged in globalization,” he said.

Salameh pointed to the long periods of void witnessed in the country, during the prolonged government formation processes, the last of which was in 2018. He also pointed to the repeated atmosphere of postponement in parliamentary elections as well.

Additionally, he referred to the consequences on the economic situation in Lebanon resulting from the resignation of Prime Minister Saad Hariri from Saudi Arabia, “all of which coincided with an expansion in the size of the public sector, thus reaching a high deficit in 2018.”

“We have also seen a decline in Lebanon’s credit rating, coupled with several negative reports that undermined confidence in our country, and the rumors and news spread by people with ulterior motives,” Salameh went on. “All of that has affected the market’s incentive,” he said.

“In light of all the given indications came the goal of the Central Bank of Lebanon to play its role as stipulated by the law, which is reflected in maintaining confidence in the Lebanese pound, an essential factor for ensuring economic growth and social stability,” Salameh emphasized.

“However, the decline in the economic cycle and the zero growth in 2019 increased the unemployment rate and affected many categories of people,” he went on to explain. “This was detected in the inability to repay housing loans,” he said, for which reason banks were asked to be more flexible in dealing with such loans.

“We are in a dollarized economy, so the Lebanese pound and its stability denote a ‘confidence heading’ for the continuous flow of the USD into Lebanon,” Salameh stated.

“We are before a new phase in which we will maintain the exchange rate of the Lebanese Lira, and the banks are dealing at the rate announced by the Central Bank, and we have the capabilities for that,” Salameh asserted.