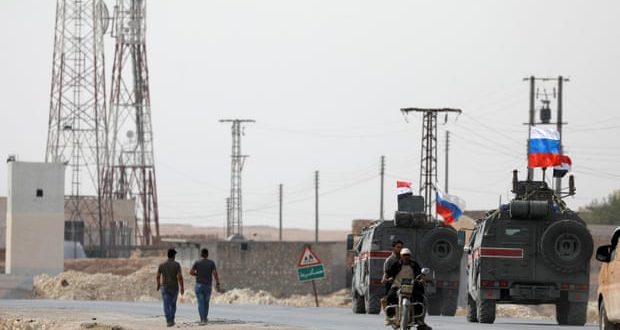 Russian troops patrol between Turkish and Syrian forces on border

Russian units have begun patrolling territory separating Turkish-backed Syrian rebels from the Syrian army around the flashpoint town of Manbij in north-east Syria, in a clear sign that Moscow has become the de facto power broker in the region after the evacuation of US troops.

Oleg Blokhin, a Russian journalist usually attached to mercenaries in Syria, posted a video on social media on Tuesday from a deserted US military base in the village of al-Saadiya, near Manbij.

“They [the US] were here yesterday, we are here today,” he said. “Now we’ll see how they were living and what they were doing.”

Meanwhile, the flag of the Syrian regime was raised above Manbij for the first time in years, Syrian state media reported, after Kurdish officials agreed a deal allowing their former opponents to protect both the contested town and nearby Kobane from a six-day-old Turkish assault.

Regime troops entered Manbij on Monday night and, at the same time, Syrian rebel proxies loyal to Turkey massed to the west ahead of a planned attack.

The strategically located town of Manbij, a US base for three years, remains a major military target for Turkey, its president, Recep Tayyip Erdoğan, said on Tuesday. Shelling between Turkish proxy Syrian rebel forces and Kurdish-led Syrian Democratic Forces (SDF) positions continued at intervals throughout the day, although there have been no reports yet of fighting inside the city itself.

Moscow’s special envoy to Syria, Alexander Lavrentyev, said on Tuesday Russia opposed the Turkish operation and would not allow direct clashes between Nato member Turkey’s troops and Syrian forces. The two sides stopped short of a direct confrontation when Ankara first put boots on the ground in Syria in 2016 to seize the area around Jarablus from Isis, in the process hampering the expansion of the SDF.

“[Fighting between Turkey and Syria] would simply be unacceptable … And therefore we will not allow it, of course,” Lavrentyev said during a visit to the United Arab Emirates, adding that Turkey and the regime were in direct contact – a major reversal since the early years of Syria’s war, in which Ankara backed calls for the removal of Syria’s president, Bashar al-Assad.

Erdoğan spoke to the Russian president, Vladimir Putin, on Tuesday about the need to prevent armed clashes between Turkish and Syrian regime troops. According to the Kremlin, Putin invited the Turkish leader for a working visit to Moscow “in the coming days” and Erdoğan accepted.

As Putin exercised his enhanced influence in Syria, Washington was scrambling to limit the damage of Donald Trump’s acquiescence in the Turkish offensive. After announcing sanctions that critics described as ineffective, Trump dispatched key figures to Ankara including his vice president, Mike Pence, the secretary of state, Mike Pompeo, national security adviser, Robert O’Brien, and special envoy on Syria, James Jeffrey.

A White House statement said Pence would “reiterate President Trump’s commitment to maintain punishing economic sanctions on Turkey until a resolution is reached.”

Erdoğan has so far refused to ease military operations, boasting on Tuesday that his troops had seized 1,000 sq km (400 sq miles) of territory from the SDF, an alliance that Ankara has long maintained is an offshoot of the militant Kurdistan Workers’ party (PKK).

The SDF was America’s ground partner in the five-year campaign against Isis and lost 11,000 troops in the long battle. Trump has attempted to rebut accusations even from his most loyal supporters that the move amounted to a betrayal.

Despite the prospect of losing the area’s semi-autonomous status, Kurdish officials struck a Russian-brokered deal with Damascus on Sunday for reinforcements to protect Kurdish-held border positions. There are unconfirmed reports that talks are still under way to implement a Russian-enforced no-fly zone over the area.

Syrian state media showed residents cheering the arrival of troops loyal to Assad in Manbij and Ain Issa, waving flags and throwing rice before the path of soldiers. The regime flag was also briefly raised above the famous clocktower square in Islamic State’s former capital of Raqqa on Monday night, a source in the city said, before it was taken down again by the SDF.

Heavy fighting in the border towns of Tel Abyad and Ras al-Ayn as well as airstrikes and shelling of other Kurdish-controlled roads and towns has displaced 160,000 people from their homes and killed at least 165 civilians. SDF counterattacks over the border have left 20 Turkish civilians dead, including a Syrian baby.

Erdoğan said that despite the threat of US and EU sanctions, as well as European arms embargos, Ankara would press on with the creation of a proposed 20-mile-deep (32km) “safe zone” on its border stretching from Manbij to Iraq, in which Turkey wants to resettle up to 2 million Syrian refugees. Turkey denies the resettlement of mainly Arab Syrians from other parts of the country would amount to demographic engineering.

The offensive has been widely condemned for precipitating a humanitarian crisis and risking the return of Isis, after about 750 people with links to the militant group took advantage of the chaos on Sunday to escape from a Kurdish-run detention camp. Footage of Syrian rebel proxies summarily executing nine Kurdish civilians on a major highway have also prompted allegations of war crimes. 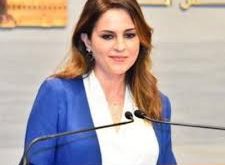