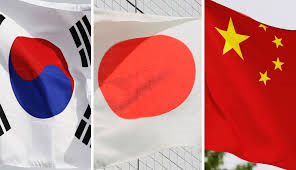 The culture ministers of South Korea, Japan and China agreed on Friday to step up cultural exchanges and other areas of cooperation despite recent tensions over trade and their shared history.

Their meeting in the South Korean port of Incheon comes amid an escalating trade and diplomatic spat between Japan and South Korea, and an intensifying regional rivalry with a rising China.
The three countries promote cultural exchanges but differing views on their shared history, such as the legacy of the Japan’s occupation of Korea and parts of China, have often hampered those efforts.
The ministers – Park Yang-woo of South Korea, Japan’s Masahiko Shibayama and Luo Shugang of China – promised more cultural, sport and people-to-people exchanges over the next 10 years. During that time Japan will host the 2020 Summer Olympics and the 2022 Winter Olympics will held in Beijing.

“The three countries made it clear that future cultural exchanges and cooperation should be conducted based on the principles of mutual respect and reciprocity and in a way that promotes cultural diversity and peace in East Asia,” the ministers said in a joint statement.
Park and Shibayama held separate talks on Thursday where they agreed to continue cultural cooperation despite the feud between Tokyo and Seoul, South Korea’s culture ministry said in a statement.
Shibayama told reporters on Friday more civilian exchanges were needed to improve ties.
“Japan-South Korea relations are in a tough spot and deepening exchanges at the grass-roots level through cooperation in the cultural field will help improve relations,” Japan’s Kyodo news agency quoted Shibayama as saying.

The row has taken a toll on tourist exchanges between the two countries, with South Koreans cancelling travel plans as part of a boycott of Japanese products and services. The number of South Korean visitors to Japan fell last month to its lowest in nearly a year, Japan’s tourism agency said last week.