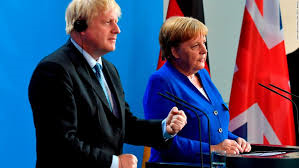 Macron rules out renegotiating Brexit deal, as French see no deal as ‘most likely outcome’

Angela Merkel has challenged Boris Johnson to come up with a solution to avert a no-deal Brexit “in the next 30 days”, putting responsibility for stopping the UK crashing out of the EU firmly at the British prime minister’s door.

After weeks of diplomatic tension, the German chancellor used her first face-to-face meeting with her UK counterpart on Wednesday to emphasise that Britain still has the power to resolve the crisis, suggesting that the backstop was “a placeholder that will no longer be necessary” if a solution to the impasse over the Irish border can be found.

But her comments were set against a backdrop of pessimism in France ahead of Johnson’s trip there on Thursday, with officials warning that Paris now views a no-deal Brexit as “the most likely outcome” and president Emmanuel Macron emphasising that a renegotiation at this point “is not an option”.

Saying that changes to the political declaration could yet provide a way forward, Merkel added an agreement could take two years “but maybe we can find that solution in the next 30 days”.

Her remarks came on day one of Johnson’s crucial visit to Berlin and Paris, his first overseas trip since he entered No 10.

In response to Merkel’s overture, Johnson sought to convey a willingness to compromise in his appearance with Merkel, saying that he was “glad” to hear his German counterpart setting such a “blistering timetable”, and adding “Wir schaffen das (“We will manage”), the same phrase Merkel famously used to sound determined in the middle of the 2015 refugee crisis.

Both leaders agreed the onus was on the UK to come up with a way to square Britain’s desire to leave the EU with the need to avert a hard border between the Republic of Ireland and Northern Ireland, as set out in the Good Friday agreement.

Merkel’s attempt to give new impetus to the talks is likely to be challenged immediately on Thursday with Johnson’s visit to France widely seen as unlikely to yield significant progress.

Ahead of the meeting with Macron and the weekend’s G7 summit, a French official said: “If the UK considers that having a backstop is absolutely excluded, that is its right, but in that case it limits the possibility of reaching an agreement.”

The official added: “The idea of saying, ‘There’s not a deal, so I won’t pay’ does not work. We cannot imagine that a country like the UK would back out of an international commitment.”

Later, Macron flatly dismissed demands from Johnson to renegotiate the UK’s exit from the EU, saying it was “not an option”.

He said scrapping the Irish backstop was impossible and would mean giving the EU an unacceptable choice between protecting its internal market by reintroducing border controls at the Irish border, or preserving peace on the island.

Macron insisted that Europe would not risk peace in Ireland and that it would be “irresponsible” to do so: “We must all remember recent history – there was war in this part of Europe until recently and those who play with that forget history too fast.”

He said he was waiting for “clarification” on several issues from Johnson.

Throughout the Brexit negotiations, Merkel has often sought a politer, more positive tone towards Britain than those carried by the soundbites coming out of Paris. Once stripped of their rhetoric, however, the two countries’ positions have so far been closely aligned.

And behind her optimistic phrasing on Wednesday lay the same cold reality that Germany and the rest of the EU are unwilling to countenance Britain’s desire to reopen the withdrawal agreement.

Merkel’s intervention appeared intended to nudge Johnson towards exploring potential for compromise in the political declaration, the second component of the Brexit deal negotiated by Theresa May. Currently only in draft form, it outlines the future trade and security relationship between the UK and the EU.

While the political declaration is not legally binding, Merkel seemed to suggest that a reformulation of the text could render the controversial backstop unnecessary, possibly by positing a closer relationship.

When pressed on how the UK could come up with a solution in such a short time period, Johnson struggled to provide a specific proposal that would avoid a hard border on the island of Ireland. His only suggestion was drawing on the work of the non-governmental Alternative Arrangements Commission, involving some checks away from the border and trusted trader schemes, which it claims could be ready in three years.

“We do think there are alternative arrangements that could readily be used to address the problem of frictionless trade at the Northern Irish border and you’ll have heard them before, whether it is trusted trader schemes or electronic pre-clearing. All that type of solution and more besides is what we will be wanting to discuss,” Johnson said.

Asked if a time limit to the backstop could point the way to a compromise between the negotiating side, Johnson said “there are other flaws to the backstop”.

Earlier, as the visit got under way, Johnson and Merkel walked down the red carpet to chants of “No to Brexit” from mostly British protesters gathered outside the gates of the chancellery.

With the military band playing the German and British anthems, the pair sat rather than stood, as has become customary for Merkel since she suffered bouts of shaking during military honours earlier this summer.

Over a working dinner of tuna tartare, saddle of venison and chocolate tart, the pair said they would discuss geopolitical issues ranging from Russia, Iran, China, the protests in Hong Kong and – in Johnson’s words – “the small matter of Brexit”.

Merkel emphasised that Germany accepted Britain’s decision to depart from the bloc of nations as “a fact”. While Germany hoped for a negotiated exit, the chancellor said, “we are also prepared for the eventuality that there won’t be such a negotiated exit”, specifically drawing attention to consequences no-deal Brexit could have for British citizens across the EU.

Reiterating the content of the letter he sent to the president of the European council, Donald Tusk, on Monday, Johnson said, “We cannot accept the current withdrawal agreement”, but that his government was “absolutely dedicated” to honour the rights of EU citizens in Britain and that his government would “under no circumstances” introduce checks on the Irish border.

Speaking after a meeting with the Slovakian president, Zuzana Čaputová, in Berlin, German president Frank-Walter Steinmeier earlier in the day voiced pessimism about the chances of constructive talks with the new British prime minister.

Regarding the backstop, Steinmeier said “all variations that could now be put on the table” had already been discussed in talks. “I therefore think it unlikely that negotiations [on the backstop] will get off the ground”.

Macron meanwhile claimed that there was currently a “British democratic crisis” over Brexit: “The British were asked to choose, in perhaps a simplistic way, without the government telling them how it would be done. Many lied about how it would be done, and democracy couldn’t find a majority to apply what people decided. It’s unheard of, but that’s what we’re living. We have to help the British deal with this internal democratic crisis, but we mustn’t be hostage to it nor export it.”