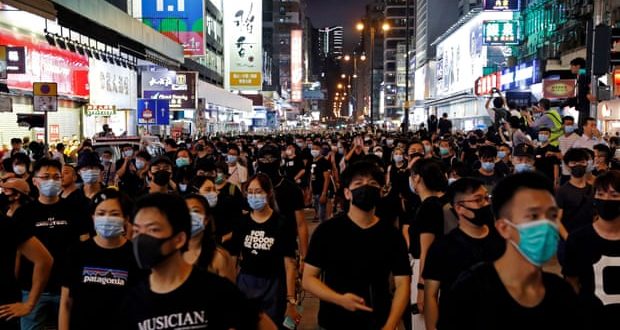 The head of the Chinese army in Hong Kong has spoken on the protests for the first time, saying the unrest has “seriously threatened the life and safety” of the people and should not be tolerated.

The commander of the People’s Liberation Army (PLA) garrison in Hong Kong warned it was “determined to protect national sovereignty, security, stability and the prosperity of Hong Kong”.

The remarks were made by Chen Daoxiang on Wednesday at a reception celebrating the 92nd anniversary of the PLA. They came the day after 43 protesters were charged with rioting and released on bail. Some of those charged were as young as 16 and included a Cathay Pacific pilot.

The PLA chief also gave his “firm” support to Hong Kong’s chief executive, Carrie Lam, as well as to to the Hong Kong police force for “rigorously enforcing the law”.

At the reception, the PLA released a dramatic video showcasing the army. In one scene, an anti-riot drill was shown where ranks of marching soldiers holding riot shields advanced and fired on fleeing “citizens”. The scene included footage of tanks rolling in, water cannon being used, and “handcuffed” citizens being led away.

A soldier was seen shouting in Cantonese, the language spoken in Hong Kong rather than mainland China: “All consequences are at your own risk.”

The commander’s intervention came as first chief executive of Hong Kong, Tung Chee-hwa, accused the US and Taiwan of orchestrating the protests that have rocked the former British colony for eight weeks.

Tung claimed that “foreign politicians and anti-China forces with ulterior motives” were working “to incite the fear of the people of Hong Kong and undermine the relationship between the mainland and Hong Kong”. He warned Hong Kong people against “being used”.

Tung, who is the vice-chairman of the Chinese People’s Political Consultative Conference, also gave his support to the Hong Kong authorities in “defending the rule of law and taking decisive measures to restore social order”, adding that they have “already heard the voice of the public”.

The remarks of both the PLA chief and Tung reiterated Beijing’s position and the rhetoric it has used throughout the protests with its backing of the Hong Kong authorities, the claims that foreign forces are intervening, and the condemnation of the increasingly violent protests.

The PLA chief’s remarks will further stoke fears that the Chinese army may intervene in the protests. Last week, an official from the Chinese defence ministry said Beijing could legally intervene should the Hong Kong government ask for help “in maintaining social order”.

Bloomberg reported yesterday that a senior US official said that the White House was monitoring a congregation of Chinese forces on Hong Kong’s border. An analyst said that it was possible that they were simply observing a police swearing-in ceremony.

“The PLA comments are part of psychological warfare against Hong Kongers,” said Andreas Fulda, a China researcher at the University of Nottingham, adding that he believed it to be highly unlikely the Chinese army would intervene to avoid “a protracted urban armed conflict”.

“Any military deployment in Hong Kong will also lead to internal disagreements within the Chinese Communist Party,” he said, adding that the city is an important financial hub for the party.

Hong Kong is in its eighth consecutive weeks of protests, which were sparked by a proposed extradition bill that would allow suspects to be sent to mainland China. Public anger has mounted over the excessive use of force by the police, which is being investigated by the city’s corruption watchdog over accusations that it failed to protect the public when masked thugs attacked protesters and train passengers earlier this month in Yuen Long.

There are protests planned for the next two weeks. This weekend, civil servants have planned a peaceful rally for Friday, while marches have been scheduled for both Saturday and Sunday across the territory. A general city-wide strike has been called for Monday, backed by the Hong Kong Confederation of Trade Unions.