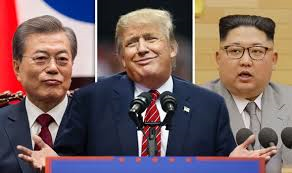 The United States looks set to break a promise not to hold military exercises with South Korea, putting talks aimed at getting North Korea to abandon its nuclear weapons at risk, the North Korean Foreign Ministry said on Tuesday.

U.S. President Donald Trump, who said he agreed to a resumption of stalled working-level talks with North Korea in a surprise meeting with its leader Kim Jong Un last month, appeared unperturbed, reiterating that he did not feel pressed to conclude a quick deal.

Earlier, North Korea’s Foreign Ministry said Washington’s pattern of “unilaterally reneging on its commitments” was leading Pyongyang to reconsider its own commitments to discontinue tests of nuclear weapons and intercontinental ballistic missiles.

“Our discontinuation of the nuclear and ICBM tests and the U.S. suspension of joint military exercises are, to all its intents and purposes, commitments made to improve bilateral relations. They are not a legal document inscribed on a paper,” it said.

In another statement carried by the state news agency KCNA, a foreign ministry spokesman accused Washington and Seoul of pressing ahead with the Dong Maeng military drills this summer, and called them a “rehearsal of war.”

“We will formulate our decision on the opening of … working-level talks, while keeping watch over the U.S. move hereafter,” the spokesman said.

A spokesman for the U.S. Defense Department said South Korea and the United States were preparing to conduct a “routine” combined training program but suggested the drills had been scaled back to facilitate diplomacy.

“This routine combined training demonstrates the United States’ commitment to the (South Korea)-U.S. alliance and defense of the Korean peninsula through activities that enhance combined readiness,” he said.

Trump had appeared to revitalize efforts to persuade North Korea to give up its nuclear weapons when he met Kim on the border between the Koreas last month and said they had agreed to resume so-called working-level talks stalled since their second summit in February collapsed.

U.S. Secretary of State Mike Pompeo said at the time the talks would likely happen “sometime in July, … probably in the next two or three weeks.” But dates have yet to be announced, and the North Korean statement raises further doubts about when – and whether – they will go ahead.

Speaking at a cabinet meeting on Tuesday, Trump nevertheless stressed his “very good relationship” with Kim and said his administration had made “tremendous progress” and had “great communication” with North Korea. He said “time is not of the essence.”

“We’ll see what happens,” Trump said. “At some point – I’m in absolutely no hurry – we can probably do something that will be very good for them and for everybody and the world.”

State Department spokeswoman Morgan Ortagus described the North Korea statements as having come from “a person within the foreign ministry.”

She said the department looked forward to resuming talks and hoped “no one would try to block – in their government or our own government – the ability for President Trump and Chairman Kim to make progress on the commitments that they made to each other.”

Despite Trump’s words of optimism, the two sides have appeared no closer to narrowing their differences over U.S. demands for North Korea’s complete denuclearization and Kim’s demands for relief from punishing sanctions.

The North Korean spokesman said Trump had reaffirmed in his meeting with Kim last month that joint exercises would be halted and the U.S. decision to forge ahead with them was “clearly a breach” of the two leaders’ agreements in Singapore last year.

“With the U.S. unilaterally reneging on its commitments, we are gradually losing our justifications to follow through on the commitments we made with the U.S. as well,” he said.

North Korea has frozen testing of nuclear weapons and intercontinental ballistic missiles since 2017. Trump has repeatedly hailed this as a triumph for his diplomatic efforts, even though North Korea tested new short-range missiles in May.

In his first meeting with Kim in Singapore in June last year, Trump pledged to halt what he called “very provocative” and expensive exercises with South Korea after the two leaders agreed to work toward denuclearization of the Korean peninsula and to improve ties.

While the main annual South Korean-U.S. exercises have been stopped, the countries still hold smaller drills.

Jacqueline Leeker, a spokeswoman for U.S. Forces Korea, said U.S. and South Korean troops continued to train together, but had adjusted the size, scope, number and timing of exercises to “harmonize” training programs with diplomatic efforts.

Speaking on a U.S. radio talk show on Monday, Pompeo did not say when talks with North Korea might resume, but he hoped both sides could “be a little more creative” in their approach to them when they did so.