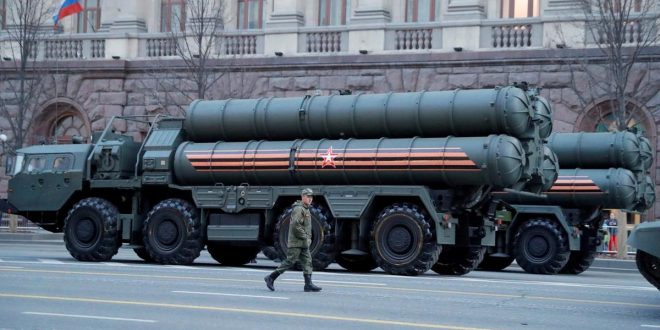 Mr Erdogan said Turkey is buying the S-400 system as “we are trying to guarantee peace and our national security.”

“We are not preparing for war,” he said in a meeting with media on Sunday, according to the state-run Anadolu Agency.

Delivery of S-400 components began on Friday, amid the threat of possible new US sanctions.

For months, the US has said there would be “very real and negative consequences” in the form of economic sanctions and expulsion from the F-35 stealth fighter project if Turkey were to accept S-400 missiles from Russia.

The US says deploying the system could undermine Nato’s military capabilities and potentially jeopardise the F-35, produced by Lockheed Martin and the Pentagon’s costliest programme.

That prompted US officials to decide on a package of penalties, to be announced once President Donald Trump has given his approval, according to people familiar with the matter.

But Mr Trump has the ability to waive sanctions, Mr Erdogan said, adding that the US president should find “middle ground” in the dispute.

Mr Erdogan said Mr Trump doesn’t favour sanctions, even if they are supported by some US officials.

“I don’t believe Mr Trump thinks the same as others under his management,” Mr Erdogan said. “He has said this loud and clear to his friends in front of the whole world media during the last meeting we had in Osaka.”

The most likely US response is Turkey’s expulsion from the F-35 programme, which it has spent $1.4 billion helping to develop. Training for Turkish pilots at a base in Arizona has already been suspended and its order for 116 planes hangs in the balance.

Economic sanctions are also possible, something that lira traders have been dreading, but the expectation that their economic impact will be minimal may prevent a rout.
“Near term, they would not affect perception of risk in Turkey as much the lack of credibility in interest rate policy,” said Hasnain Malik, the head of equity strategy at Tellimer, a company focused on emerging markets. “Long term, Turkey remains a key ally of the US, particularly when the US is positioned against Iran and Russia.”
The lira is the world’s most volatile currency this year and has declined 7.6 per cent against the dollar.