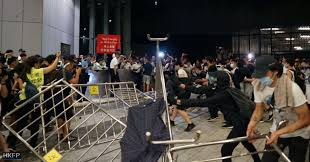 Clashes in Hong Kong after vast protest against extradition law

Riot police have clashed with protesters in Hong Kong after hundreds of thousands of people marched through the streets in a massive demonstration against a proposed extradition law.

Critics say the proposed law will allow mainland China to pursue its political opponents in the city, which has traditionally been a safe haven from the Communist party.

A largely peaceful scene outside the parliament and government headquarters in the Admiralty business district changed dramatically in the early hours of Monday as police wearing riot gear moved in with batons and pepper spray on protesters who hurled bottles and metal barricades.

Earlier on Sunday a sea of people, many wearing white, stretched for almost two miles as they marched from Victoria Park, in the east of Hong Kong island, to the government HQ. Thousands more struggled to board packed public transport from outer Hong Kong and Kowloon on the mainland.

After seven hours of marching, organisers estimated that more than 1 million people had taken part, far outstripping a demonstration in 2003 when half that number successfully challenged government plans for tighter national security laws. A police spokesman said they estimated that 240,000 were on the march at its peak.

Small groups of young protesters had planned to stay outside the government HQ until Wednesday, when the extradition bill is due to have its second reading, but police moved in on them after their permission to protest expired at midnight. Within minutes scenes of chaos unfolded as protesters fought with officers who were soon backed by riot police.

An hour or so later riot police moved into clear out the remaining protesters. There was little resistance after the earlier violence, although some pockets of people remained sitting.

Earlier police had closed metro stations and funnelled people through narrow thoroughfares, prompting accusations that they were deliberately attempting to reduce the scale of the protest. Anger grew and the crowd shouted for police to free up more space as the march came to a dead stop for large sections in stifling heat. Further down the road, crowds jeered at a pro-China broadcast on a large outdoor screen.

The bill creates a system for case-by-case fugitive transfers between semi-autonomous Hong Kong and regions with which it does not already have agreements, including mainland China.

Critics say the proposed law would legitimise abductions in the city and subject political opponents and activists to China’s widely criticised judicial system. They fear that a pro-Beijing Hong Kong government would not resist requests of a political nature.

Chants and placards targeted Carrie Lam, Hong Kong’s chief executive, who has pushed for the amendments to be passed before July. Rocky Chang, a 59-year-old professor, told Reuters: “This is the endgame for Hong Kong. It is a matter of life or death. That’s why I come. This is an evil law.”

A retired lawyer who gave his name only as Anthony said the government had “tried to hoodwink us into agreeing much too quickly with something that has tremendous significance to Hong Kong”.

He said the bill posed a huge risk to the rule of law and would not provide Hong Kong’s courts with the ability to provide proper oversight. “And yet our chief executive tries to tell us there is no need to worry, the court is going to protect you,” he said. “What bullshit.”

Anti-Beijing anger has been fuelled by the jailing in April of organisers of pro-democracy protests in 2014 and by the reduced presence of pro-democracy legislators after six were removed from parliament in 2016 and 2017 for protesting against Beijing during their oath-taking.

Since the end of British rule in 1997, Hong Kong has operated under the “one country, two systems” principal, with a legal system seen internationally as its strongest asset. However, many feel the city’s autonomy has been eroded by Beijing’s growing influence.

Martin Lee QC, a pro-democracy figure and former legislator who helped organise the protests, told the Guardian: “If we lose this one, Hong Kong is not Hong Kong any more, it’s just another Chinese city.”

On Sunday evening Lee addressed thousands of people outside the government HQ. Thousands were yet to arrive, prompting speculation that the rally could turn into an Occupy-style event in the manner of protests in 2015 that went on for 89 days.

Lee said the government was “saying no to democracy and suppressing human rights and the rule of law”, and that if it did not listen he expected further, perhaps bigger protests on 1 July.
James To, a veteran Democratic party politician, told the crowd: “[Lam] has to withdraw the bill and resign. The whole of Hong Kong is against her.”

Before the late night disturbance police said six people had been arrested for criminal destruction and one for assault.

The Hong Kong government says the bill is needed to fight crime and that China is an important strategic partner in that regard. However, suspicions that the initiative for the law had come from Beijing were bolstered last month when a politburo member revealed that its targets included foreigners who had committed crimes against Chinese national security outside China.
Advertisement

Corrupt Chinese officials and tycoons who have fled to Hong Kong are also a key concern for the mainland government, which has never had a fugitive transfer request to Hong Kong granted in the 22 years since the end of British rule.

Human rights groups, legal alliances and numerous governments have expressed their concern about the bill.
The US secretary of state, Mike Pompeo, said that it could damage the rule of law in Hong Kong, and a bipartisan congressional committee urged Lam’s administration to listen to the concerns, saying local and foreign residents in Hong Kong had to be protected “from a criminal justice system in mainland China that is regularly employed as a tool of repression”.