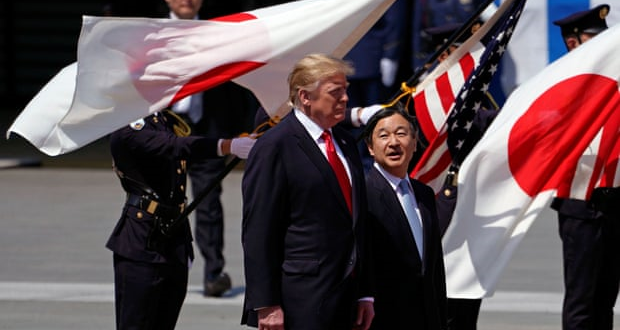 Donald Trump has said he would support Shinzo Abe’s efforts to act as a mediator between the US and Iran, amid reports that the Japanese prime minister will visit Tehran next month for talks with president Hassan Rouhani.

Tehran says it has no interest in talking to the US administration, which has imposed tough sanctions on the country over its nuclear programme, and last week sent 1,500 troops to the region.

“I know that the prime minister and Japan have a very good relationship with Iran so we’ll see what happens,” Trump, who has offered Tehran direct talks, told reporters in Tokyo on the penultimate day of his state visit to Japan.

“The prime minister has already spoken to me about that and I do believe that Iran would like to talk. And if they’d like to talk, we’d like to talk also. We’ll see what happens … nobody wants to see terrible things happen, especially me.”

On Monday, Trump became the first leader to meet Japan’s new emperor, Naruhito. The US president said it was a “great honour”.

Trump’s conciliatory tone extended to North Korea, despite the deadlock in denuclearisation talks and Pyongyang’s recent testing of short-range missiles.

Trump said his relationship with North Korean leader Kim Jong-un was one of “great respect”, and talked up the prospects for progress on dismantling the regime’s nuclear weapons programme.

North Korea responded by calling Trump’s national security adviser, John Bolton, a “warmonger” and “defective human product” after he said at the weekend that there was “no doubt” that Pyongyang’s short-range missile tests early this month violated UN security council resolutions.

An unnamed North Korean foreign ministry spokesman said North Korea was exercising its right to self-defence with the launches, the first since late 2017.

“Bolton should not be called a security adviser who works to secure security, but an adviser for security destruction who destroys peace and security,” the spokesman said, according to the North’s official KCNA news agency.

“It’s not that strange that crooked sound will always come out the mouth of a man who is structurally flawed, and it’s best that this defective human product goes away as soon as possible.”

On Monday, Trump, who had spent the previous day with Abe playing golf, watching sumo and dining out at a Japanese charcoal-grill restaurant, became the first world leader to meet Japan’s new emperor, Naruhito, and his wife, empress Masako.

The couple welcomed Trump and the first lady, Melania, to the imperial palace, where the president made a solo inspection of a self-defence force guard of honour and met Japanese and US officials and politicians.

Trump said it was a “great honour” to be the first leader to meet Naruhito, who became emperor weeks ago after his father, Akihito, became the first Japanese monarch to abdicate for 200 years.

The couples later chatted inside – reportedly without the help of interpreters, as Naruhito and Masako are both fluent in English. Melania Trump gave Masako a desk set that included a fountain pen made from a red oak tree that stands in the grounds of Harvard University, where the empress studied economics.

With the pageantry over, Trump and Abe held talks in the afternoon that focused on Iran, North Korea and the potentially tricky issue of trade.

Trump said US-Japan relations had “never been better,” but with the allies locked in talks over a bilateral trade deal, he has complained about the “tremendous” trade deficit with Japan several times since he arrived on Saturday.

“I think we will be announcing some things probably in August that will be very good for both countries,” Trump said, adding that Japan has “been doing much more business with us and we’d like to do a little bit more business in the reverse.”

“We’re working on that, and I’m sure that will work out over a period of time,” Trump added. “We’ll get the balance of trade straightened out rapidly.”

Japan is desperate to see off Trump’s threats to impose high tariffs on its cars and auto parts as part of an effort to reduce trade surpluses with other countries.