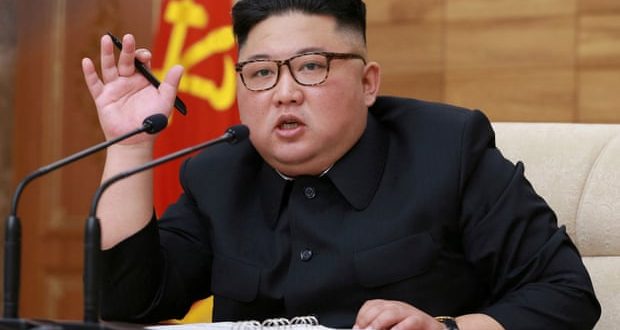 Kim Jong-un has vowed to deliver a “serious blow” to hostile countries he accused of using sanctions to bring the regime “to its knees”, according to the country’s state media.
The North Korean leader’s broadside against measures imposed in response to missile and nuclear programmes comes weeks after his second summit with Donald Trump ended in failure after they disagreed on how to match sanctions relief with progress on denuclearisation.
“We must deal a serious blow to the hostile forces who are mistakenly determined to bring us to our knees with sanctions by advancing the socialist construction to a high level of self-reliance that fits our circumstances and state, based on our own power, technology and resources,” Kim said, according to the state news agency KCNA.
Speaking at a plenary session of the central committee of the ruling Workers’ party of Korea on Wednesday, Kim did not mention the US by name or refer to North Korean nuclear weapons, but analysts saw his reference to “hostile forces” as a clear attempt to increase pressure on Washington.
“It did not directly mention the US, but linked sanctions with hostile forces,” said Shin Beom-chul, a senior fellow at the Asan Institute for Policy Studies in Seoul. “He’s saying North Korea would take an independent course unless the US offered to lift sanctions. You maintain sanctions, you’re a hostile force; if you ease sanctions, you’re not.”
Diplomatic attempts to break the deadlock over denuclearisation have faltered since Kim and Trump parted without an agreement after two days of talks in Hanoi at the end of February.
Pyongyang said it had pushed for limited sanctions relief in exchange for dismantling its main nuclear facility at Yongbyon. The US, however, claimed the regime had demanded that all sanctions be dropped, adding that Washington would only lift sanctions in their entirety if North Korea dismantled of all of its nuclear and weapons programmes.
At a politburo meeting earlier this week, Kim described the current situation as “tense” and repeatedly stressed that “self-reliance” was the country’s best hope of countering international efforts to use sanctions to force it to abandon its nuclear weapons and ballistic missiles.
Kim’s emphasis on the economy has been in evidence in the past week, with state media publishing reports of his visits to several projects, including a remodeled department store, tourist resorts and an economic hub near the border with China.
Despite Kim’s warning at the start of the year that North Korea could take a “new path” if Washington persisted with sanctions, South Korean officials said they expected him to continue focusing on the economy now that the North has declared itself a “complete” nuclear state.
“We believe that last year’s new strategic line, the all-out focus on economic construction, will remain,” Baik Tae-hyun, a unification ministry spokesman said.
The North Korean supreme people’s assembly – its rubber-stamp parliament – will meet on Thursday as the South Korean president, Moon Jae-in, meets Trump in Washington in an attempt to kickstart nuclear negotiations.
Moon is also hoping to win concessions on sanctions to enable the South to cooperate on cross-border tourism and industrial projects that he and Kim agreed to during their third summit last September.
The US secretary of state, Mike Pompeo, offered Moon a glimmer of hope on Wednesday when he told the Senate foreign relations committee that he would like to leave “a little room” in the sanctions regime in case the North makes substantial progress” on denuclearisation.