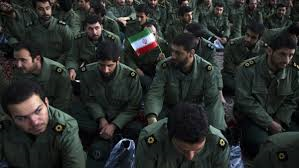 President Donald Trump said on Monday he would name Iran’s elite Islamic Revolutionary Guard Corps a terrorist organization, in an unprecedented step that drew Iranian condemnation and raised concerns about retaliatory attacks on U.S. forces.
The action by Trump, who has taken a hard line toward Iran by withdrawing from the 2015 Iran nuclear deal and re-imposing broad economic sanctions, marks the first time the United States has formally labeled another nation’s military a terrorist group.
The U.S. step, which takes effect on April 15, prompted an immediate response from Iran, whose Supreme National Security Council in turn designated U.S. military forces as a “terrorist organization,” Iranian state-run TV reported.
“The U.S. military bases and their military forces in the region will be considered terrorist bases and terrorist forces that will be dealt with and confronted accordingly,” Iran’s Deputy Foreign Minister Abbas Araqchi told Iranian state TV, calling the U.S. decision “a major strategic mistake.”
“The IRGC is the Iranian government’s primary means of directing and implementing its global terrorist campaign,” Trump said in a statement. His administration has long criticized Iran for its influence in Iraq, Syria and Yemen.
Critics of Trump’s decision said it was largely symbolic because U.S. law already carried penalties of up to 20 years in prison for U.S. persons who deal with the IRGC because of its designation under another U.S. sanctions program, the U.S. Specially Designated Global Terrorist list.
POTENTIAL BACKLASH
Senior U.S. military commanders share Trump’s concerns about Iran and the IRGC but long opposed the designation due to concern over a potential backlash against U.S. forces in the Middle East and the problems it could create for U.S. partners who have a relationship with Iran, U.S. officials say.
The Pentagon declined to discuss what the U.S. military was doing to protect American troops from any retaliation by the IRGC or Iran-aligned militia in places like Iraq.
U.S. officials, speaking on condition of anonymity, said the designation did not mean the U.S. military would start treating the IRGC like al Qaeda, Islamic State or other militants that it can target at will.
“This is not about going to war with Iran or killing a bunch of Iranians. Absolutely not,” said one, adding the U.S. military had not been given any new direction to “go after” Iranian forces.
Three Iranian officials said that despite Tehran’s harsh rhetoric, Iran’s reaction will be “diplomatic and mild.”
Jason Blazakis, a former State Department official who oversaw the process for labeling foreign terrorist organizations, said he believed the IRGC designation was done for purely symbolic and domestic political reasons that could have deadly consequences for U.S. troops.
He said it could prompt Qassem Soleimani, the powerful commander of the Quds Force, the IRGC’s elite foreign espionage and paramilitary contingent, to allow IRGC-controlled Shi’ite Muslim militias to retaliate against U.S. forces in Iraq.
“I imagine that tight leash he (Soleimani) has had on them (Shi’ite militias) will be less tight. He could call for them to take actions against U.S. assets in places like Baghdad’s Green Zone,” he continued, referring to the Iraqi capital’s diplomatic and governmental enclave.
The only “theoretical benefit” the designation could provide is to make it slightly easier for the Justice Department to prosecute people for providing “material support” to the IRGC, he said. The Department already has the authority for similar prosecutions under an executive order signed by President George W. Bush soon after the Sept. 11, 2001, attacks by al Qaeda…