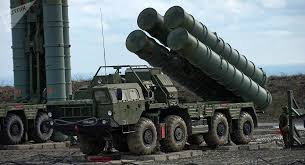 Turkish President Recep Tayyip Erdogan now faces a choice that will have major consequences for both Turkey’s foreign relations and its economy.
He can walk back pledges to buy a Russian missile defense system, the S-400, in favor of buying American weapons systems, or reject U.S. demands and forgo partaking in the F-35 joint strike fighter program, essentially choosing Moscow over Washington.
“The government’s decision on this issue will be something the market will watch very closely,” Shamaila Khan, director of emerging market debt strategies at AllianceBernstein, told CNBC on Tuesday.
“Any increase of tensions with the U.S. will weigh on Turkish assets.”
Ankara signed an agreement with Moscow for S-400 missiles in 2017, a deal reportedly worth $2.5 billion. All the while, Turkey has helped finance America’s most expensive weapons system, the F-35 Joint Strike Fighter, investing $1.25 billion in the program to date.
The Pentagon has already announced a halt in delivery of F-35 components to Turkey this week, the latest in a long series of tension-raising moves between homes of NATO’s two largest militaries.
Erdogan’s march toward procuring the Russian missile system has raised concerns among NATO partners and Washington who worry it can target stealth warplanes like the U.S. F-35 fighter. Washington is also wary of Moscow’s increasing military presence in the region.
Will the lira fall further?
“If the U.S.-Turkey relationship deteriorates again, it is highly possible that the lira could, again, depreciate sharply against major currencies,” said Agathe Demarais, principle Europe economist at the Economist Intelligence Unit.
Turkey’s economy is already in recession, rocked last year after fears over government interference into central bank independence, over-leveraged banks, a large current account deficit and a diplomatic spat with the U.S. triggered investor and capital flight. The lira lost 36 percent of its value against the dollar by the end of 2018.
Inflation and unemployment are in the double-digits, with the latter expected to rise as a result of slower economic growth.
“Against this backdrop, the Turkish government will be keen to avoid antagonizing the U.S. for fear of triggering another currency crisis that the banking sector probably wouldn’t be able to sustain,” Demarais said.
Turkish companies are also expected to benefit from the F-35’s manufacturing and industrial opportunities — to the tune of up to $12 billion by Lockheed Martin’s calculations, the jet’s prime contractor.
But Erdogan has made numerous statements saying that there will be no backtracking on the S-400. This is motivated by Ankara’s reliance on Russian approval for its actions in Syria, and Erdogan’s desire to show his domestic base that he doesn’t bow to U.S. pressure.
‘The ball is in Erdogan’s court’
In addition to seeking the best-priced weapons system, Erdogan “saw geostrategic reasons for purchasing a Russian system, given Turkish reliance on Russia for achieving a favorable outcome to the war in Syria,” Amanda Sloat, a former Deputy Assistant Secretary of State with responsibility for Turkey policy, told CNBC.
“Congress has plainly stated its unhappiness with the planned purchase, imposing sanctions via CAATSA for the purchase of Russian defense equipment,” she added.
But statements from the Pentagon suggest continued dialogue. Acting U.S. Defense Secretary Pat Shanahan said Tuesday he expects the Pentagon to deliver Turkey’s orders of the F-35s as long as the country uses the U.S. Patriot air and missile system.
“However, the ball is in Erdogan’s court with a stark choice between two paths,” Sloat said.
Asked about the future trajectory of the lira, Timothy Ash, senior emerging markets strategist at Bluebay Asset Management, said simply: “S-400 issue (is the) key question mark.”
The crash in the lira last summer, tipped over the edge after the U.S. slapped sanctions on Turkey for its arrest of an American pastor, is proof that “whenever the Turkish economy is not in good shape, any crisis with the U.S. compounds the negative turndown effect of the economic crisis,” said Soner Cagaptay, director of the Turkish Research Program at the Washington Institute.
“So the sense of a brewing crisis with the U.S. will aggravate the economic downturn.”
While that may mean cheap Turkish assets for risk-taking investors — Demarais and the EIU predict the lira falling to a rate of 5.7 to the dollar for the rest of 2019 compared to the current roughly 5.6 — Ian Bremmer, CEO and founder of risk consultancy Eurasia Group, says: “We still think political risk is underpriced. So I’d stay away.”