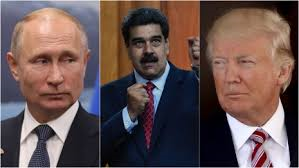 US president says Moscow’s soldiers should ‘get out’

Russia has said its troops will remain in Venezuela “for as long as needed” in a blunt rejection of Donald Trump’s demand they leave immediately.
In the latest indication the crisis in Venezuela is taking on elements of a proxy battle between the former Cold War rivals, a spokeswoman for Russia’s foreign ministry said the troops had been dispatched to fulfil “military contracts”.
“They are involved in the implementation of agreements in the sphere of military and technical cooperation,” said Maria Zakharova, according to the AFP, adding that the troops would stay there “for as long as needed”.
“Russia is not changing the balance of power in the region, Russia is not threatening anyone,” she said.
Russia’s comments came after Mr Trump this week told Russia to get out of Venezuela. At an event at the White House on Wednesday where he met Fabiana Rosales, wife of Juan Guaidó, the Venezuelan opposition leader who in January declared himself president and was quickly recognised by the US and around 50 nations, Mr Trump was asked about the presence of Russian troops.
“Russia has to get out. What’s your next question,” he said. Asked if that message had been delivered to Moscow, he replied: “They know. They know very well.”
The US has been seeking to force from office Venezuelan president Nicolas Maduro, who has accused Washington of trying to orchestrate a coup. Mr Maduro was sworn in for a second term in January, following an election last year that was boycotted by elements of the opposition.
The US, UK and other Western nations claimed the election was not fair. Mr Maduro and his supporters have pointed to the testimony of independent election observers who said it was, and claim the main opposition intentionally boycotted the ballot in order to be able to allege it had no legitimacy.
The US and Mr Guaidó have been seeking to use the issue of aid as a lever against Mr Maduro, who has until now critically retained the support of the armed forces.
Last month, Mr Maduro refused to allow US aid into the country, pointing to previous incidents in Latin America when the US had smuggled weapons to anti-government forces in such shipments. His country has been working with the UN to increase the distribution of food and other supplies, amid claims of shortages of basic necessities.
On Thursday, Reuters said an internal UN report suggested about a quarter of Venezuelans were in need of humanitarian assistance.
The report painted a dire picture and estimated 94 per cent of its 28.8m people were living in poverty. It said 3.4m people had fled, with a further 1.9m expected to follow in this year.
“Much more action is required to meet the growing needs of the Venezuelan people,” it said.
At the same it, it called on both Mr Maduro and Mr Guaidó not to allow the issue of aid to become politicised. “The politicisation of humanitarian assistance in the context of the crisis makes delivery of assistance in accordance with the principles of neutrality, impartiality and independence more difficult,” it said.
In recent days, the misery for many in the country has become worse amid a second major power blackout this month. Up to 24 people died during the previous blackout in public hospitals.
Mr Maduro, whose government accused Mr Guaidó’s supporters of sabotaging the power system, announced a load management plan for the coming days.
Meanwhile, Mr Guaidó called for more protests. “The time has come to agitate in every state, in every community, to get water back, get electricity back, get gas back,” he said.
At least 100 Russian troops and 35 tonnes of equipment were seen landing in Caracas last weekend. The BBC, quoting Russia’s Sputnik news agency, said they were there to fulfil technical military contracts.