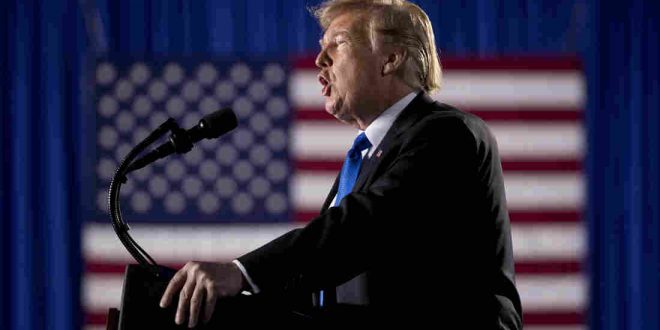 Donald Trump has issued his most blunt threat yet to Venezuela’s military – stop supporting Nicolas Maduro or risk “losing everything”.
In a speech in which he claimed “the evils” of socialism were also being turned back in Cuba and Nicaragua and that the US would never be a socialist country – comments that were likely made with the US’s 2020 presidential election in mind – the president spoke directly to military officials who have so far overwhelmingly supported Mr Maduro.
“There will be no going back. Venezuela is leaving socialism, the dictatorship, and there is no turning back,” he told a crowd of Venezuelan-Americans and immigrants in Florida. “The time has come for the farewell to the socialism of our hemisphere, not only in Venezuela, but also in Nicaragua and Cuba.”
The president’s language in Miami was striking even by his standards. Washington has a long history of interfering in the governments of Latin American nations it dislikes, and during the 1980s it armed and supported fighters that sought to overthrow the elected government in Nicaragua. In addition to decades of debilitating sanctions against Cuba, the CIA tried – and failed – on dozens of occasions, to assassinate its revolutionary leader, Fidel Castro.
The US’s attempt to unseat Mr Maduro, who was sworn in for a second term last month following elections in the spring of 2018 which were boycotted by some opposition parties over the jailing of many of their leaders, is the latest effort at so-called regime change in the nation. Washington has long looked to undermine Mr Maduro and his predecessor, Hugo Chavez.
Yet the efforts have never been this extensive. Last month Juan Guaidó, who had served as president of the national assembly, declared himself interim president – something that was quickly supported by the US, UK, Canada and other nations. Russia and China have continued to recognise and support Mr Maduro.
In addition to imposing sanctions and suggesting the US is prepared to use military force to remove Mr Maduro, Washington has heaped additional pressure by dispatching aid shipments to locations outside of Venezuela, but close to the border. Millions of Venezuelans have fled the country as the nation’s economy has continued to struggle.
“He would rather see his people starve than give them aid,” Mr Trump said of Mr Maduro.
While Mr Maduro has said he is willing to accept aid organised by the UN, he has said the US aid shipments that Mr Guaidó’s supporters are planning to distribute are part of an attempted “coup”. Maduro’s devotees point out the US in the past used aid shipments to countries such as Nicaragua to send arms to anti-government forces. Ellliot Abrams, Mr Trump’s point man on Venezuela, was several decades ago, convicted of lying to Congress during the Iran-Contra scandal.
White House press secretary Sarah Sanders said earlier on Monday that the US “knows where military officials and their families have money hidden throughout the world”.
The Associated Press said South Florida was home to more than 100,000 Venezuelans and Venezuelan-Americans, the largest concentration in the country. Speaking in the presidential battleground state, Mr Trump also sought to draw a contrast with the policies of progressive Democrats, such as Alexandria Ocasio-Cortez, which he brands as “socialist”, as he prepares for a re-election fight.
Mr Trump claimed “socialism has so completely ravaged Venezuela that even the world’s largest reserves of oil are not enough to keep the lights on”. He added: “This will never happen to us…America will never be a socialist country.”
There was no immediate response to Mr Trump’s comments from Mr Maduro, who until this point has retained the support of the vast majority of his senior military officers. On Monday afternoon, he posted a video on social media of himself “meeting with specialists in research, innovation and experimentation”.
Supporters of Venezuela denounced Mr Trump’s speech. Cuba’s foreign minister, Bruno Rodríguez Parrilla, said on Twitter: “We call on all governments, parliaments, political forces; social, popular and indigenous movements; national and international organisations and NGOs, to publicly express themselves against the use of the #US military force in South America.”