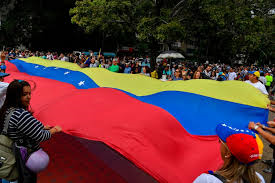 The oppression of the illegitimate, kleptocratic Maduro regime must end,’ says Jeremy Hunt

Russia has warned against “destructive meddling” in Venezuela as Britain recognised opposition leader Juan Guaido as interim president.
The US, Canada and several Latin American and European countries have disavowed Nicolas Maduro over his disputed re-election last year and recognised Mr Guaido, the national assembly president, as the country’s rightful leader.
“The international community’s goal should be to help [Venezuela], without destructive meddling from beyond its borders,” Alexander Shchetinin, head of the Latin America department at Russia’s foreign ministry, told the Interfax news agency.
Britain’s foreign secretary, Jeremy Hunt, said the UK and its European allies recognised Mr Guaido following Mr Maduro’s decision not to call new presidential elections following a collective ultimatum.
“Nicolas Maduro has not called presidential elections within eight-day limit we have set,” Mr Hunt tweeted. “So UK alongside European allies now recognises Juan Guaido as interim constitutional president until credible elections can be held. Let’s hope this takes us closer to ending humanitarian crisis.”
It came after Donald Trump said military intervention in Venezuela was “an option”.
Last week his administration issued crippling sanctions on Venezuelan state-owned oil firm PDVSA, a key source of revenue for the troubled Opec nation, whose population is experiencing malnutrition and medicine shortages.
Canadian prime minister Justin Trudeau promised $53m (£30.8m) in aid to “address the most pressing needs of Venezuelans on the ground”.
Mr Maduro, who has overseen an economic collapse and the exodus of millions of Venezuelans, is still backed by Russia, China and Turkey, and has the critical support of the military.
“We don’t accept ultimatums from anyone,” Mr Maduro said in a defiant interview with Spanish TV channel Antena 3 carried out last week and broadcast on Sunday.
“I refuse to call for elections now – there will be elections in 2024. We don’t care what Europe says.”
In another interview with Spanish broadcaster Salvados TV, he warned Mr Trump to “hold it right there”.
He told the US president: “You are making mistakes that will leave your hands covered in blood and you will leave the presidency stained with blood.”
Mr Guaido proclaimed himself interim leader on 23 January amid mass protests against the Maduro regime.
He argued Mr Maduro’s re-election in May was fraudulent and said, as head of Venezuela’s congress, that the country’s constitution gave him power to be interim president.
After Mr Maduro warned he could not rule out civil war if the protests continued, Mr Hunt cautioned that those responsible for human rights violations would be held to account.
“The people of Venezuela have suffered enough. It is time for a new start, with free and fair elections in accordance with international democratic standards,” he said in a statement.
“The oppression of the illegitimate, kleptocratic Maduro regime must end. Those who continue to violate the human rights of ordinary Venezuelans under an illegitimate regime will be called to account.
“The Venezuelan people deserve a better future.”