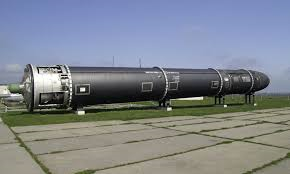 Russia has unveiled a new missile as it attempts to show the US it is not violating a key nuclear arms pact.
The Russian military spelled out the exact specifications of the land-based cruise missile to demonstrate it conforms to the limits of the Intermediate-Range Nuclear Forces Treaty (INF) which bans the production, testing and deployment of land-based cruise and ballistic missiles with a range of 500 to 5,500 kilometres (310 to 3,400 miles).
Washington had announced its intention of abandoning the INF because they believe the new Russian missile violated provisions of the pact – a claim that Moscow denies.
The US has said it will suspend its treaty obligations if Russia does not come into compliance by 2 February.
Lieutenant General Mikhail Matveevsky, the chief of the Russian military’s missile and artillery forces, said at a meeting with foreign military attaches that the new missile has a maximum range of 480 kilometres.
He said the 9M729 missile differs from the previous 9M728 model by having a modified warhead and guidance system that enhances its capability.
The military then displayed the weapon along with its mobile launcher during a presentation at its exhibition centre near Moscow.
Lt Gen Matveevsky insisted that the new missile’s booster, cruising engine and fuel tank remain unchanged.
He added that the new missile actually has a range 10 kilometres less than the older type due to heavier warhead and control systems and emphasised that the new missile cannot be modified in field conditions.
The Russian general said that the modified mobile launcher for the new type of missile is bigger because it carries four of them rather than the previous two.
Lt Gen Matveevsky added that the military gave the presentation to underline its “increased transparency and our adherence to the INF Treaty”.
The Kremlin has staunchly denied the US claim of Russian violations of the pact.
Russian deputy foreign minister Sergei Ryabkov noted that the US has not put forward any data to prove its claim that Russia has tested the missile at a range exceeding the treaty’s limit.
He said the US ignored Moscow’s offer to inspect the missile made during talks in Geneva earlier this month – a refusal he alleged reflected the lack of US interest in meaningful negotiations.
Mr Ryabkov said the US has made it clear during diplomatic contacts that President Donald Trump’s decision to abandon the pact is final and not subject to talks.
US undersecretary of state Andrea Thompson, who led the American side in the talks, has said Moscow’s offer is inadequate.
“To see the missile does not confirm the distance that missile can travel, and at the end of the day that’s the violation of the treaty,” she told reporters last week.