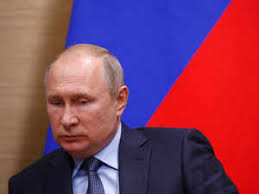 ‘What will our response be? Simple. We’re going to do the same,’ said Vladimir Putin

Russian president Vladimir Putin has suggested Russia would develop intermediate-range nuclear arms in response to the US exiting a key Soviet-era arms control agreement.
“It seems our American partners think … they should have such arms,” he said. “What will our response be? Simple. We’re going to do the same.”
US Secretary of State Mike Pompeo said on Tuesday the US would suspend its obligations under the 1987 Intermediate-range Nuclear Forces (INF) treaty within 60 days, over what it describes as Russian “non-compliance”.
Speaking in Moscow on Wednesday, Mr Putin said the US had decided to blame Russia as a pretext for getting out of the deal.
“Pompeo is so late with this. First, the US announces its intention to leave the agreement, and then decides to look for the reasons,” he said. “They revert to their easiest and most familiar refrain: Russia’s to blame.”
The US and Russia have accused each other of violating the 1987 deal since at least 2011. The last inspections were made in 2001.
In his first term, Barack Obama’s administration toyed with the idea of leaving the treaty over Russia’s alleged development of a new mid-range cruise missile. Eventually, and under pressure from German chancellor Angela Merkel, the US stuck with the deal.
Moscow admits to having the SSC-8 missiles in question, but says they do not violate the treaty. What’s more, Russia accuses the United States of being in breach of the deal itself, arguing its European missile defence systems are capable of taking offensive nuclear loads.
For a long while, neither side seemed entirely happy with the treaty, but neither were ready to tear it up. The appointment of hawk John Bolton as national security advisor this year was a major turning point.
In October, arms control sceptic Mr Bolton visited Moscow to inform Mr Putin the United States intended to leave the “outdated” treaty.
“It’s important to look at the reality,” he told a press conference in Moscow following the talks. The treaty was not a “cornerstone” of world security, he said, nor did it apply to emergent Asian nuclear powers.
“It is outmoded and ignored by other countries. Only one country is following it.”
In October, former Soviet leader Mikhail Gorbachev – one of the architects of the treaty – described the US intention to leave the agreement as “pathological”. Any “agreement directed against nuclear disarmament should be kept to preserve life on Earth,” he said.
It seems likely the end of the INF treaty will be followed by non-renewal of NEW Start, another key arms control treaty, that is due to end in 2021.
And that, says independent military expert Alexander Golts, would take the world to a dangerous place.
Russia and the US would be left without any nuclear arms control treaties, he said: “Without them, we’re back to where we were on the eve of the Cuban missile crisis.”