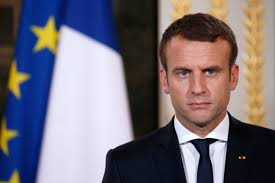 ‘Patriotism is the exact opposite of nationalism. Nationalism is a betrayal of patriotism’

Emmanuel Macron has issued a hard-hitting warning about the dangers of nationalism and of countries that put their interests before the collective good – in front of Donald Trump and Vladimir Putin.
The French president denounced those who evoke nationalist sentiment to disadvantage others, calling it a “betrayal of patriotism” and moral values.
The US and Russian leaders listened in silence as Mr Macron took a swipe at the rising tide of populism in the US and Europe, warning: “The old demons are rising again, ready to complete their task of chaos and of death.”
During a gathering of dozens of world leaders to mark 100 years since the end of the First World War, the French president went on: “Patriotism is the exact opposite of nationalism. Nationalism is a betrayal of patriotism.
“In saying, ‘Our interests first, whatever happens to the others’, you erase the most precious thing a nation can have, that which makes it live, that which causes it to be great and that which is most important: its moral values.”
The US president, who has repeatedly declared himself a nationalist, sat stony-faced.
Mr Trump defended his use of the phrase just last week, saying: “You know what the word is? I love our country. You have nationalists. You have globalists. I also love the world and I don’t mind helping the world, but we have to straighten out our country first. We have a lot of problems.”
More than five dozen heads of state and government had gathered today at the Tomb of the Unknown Soldier at the base of the Arc de Triomphe in Paris, a century after guns fell silent in the war that killed millions of people.
In a speech lasting nearly 20 minutes, Mr Macron also called on fellow leaders to fight for peace.
“Ruining this hope with a fascination for withdrawal, violence or domination would be a mistake for which future generations would rightly find us responsible,” he said.
The French leader also defended the European Union and the United Nations, which he said guaranteed peace and enshrined “a spirit of cooperation to defend the common property of a world whose destiny is inextricably linked”.
German Chancellor Angela Merkel also had a veiled dig at Mr Trump’s America-first policies and his scepticism over multilateral cooperation, saying that “lack of communication and unwillingness to compromise” can have deadly consequences.
Making an impassioned plea for world peace and cooperation 100 years after Germany’s defeat in the First World War, she said “we must not simply stand by and watch” as more conflicts continue to unfold around the world.
She denounced the “national vaingloriousness and military arrogance” that led to the “senseless bloodshed” of two world wars, and warned against taking peace for granted, saying: “We have to work for it.”
In his own speech, Mr Trump paid tribute to US and allied soldiers killed in the First World War.
“We are gathered together at this hallowed resting place to pay tribute to the brave Americans who gave their last breath in that mighty struggle,” he said at the Suresnes American Cemetery and Memorial in Paris, where more than 1,500 American war dead are buried.
“It is our duty to preserve the civilisation they defended and to protect the peace they so nobly gave their lives to secure one century ago.”
On Friday, Mr Trump had described a call by Mr Macron for a European army to defend Europe from China, Russia and even the US as “very insulting”.
But Mr Putin said it made sense for a powerful economic bloc such as the EU to want to defend itself militarily.
“Europe is a powerful economic entity, a powerful economic union, and it is quite natural that it wants to be independent, self-sufficient and sovereign in matters of defence and security,” Putin told RT television’s France network, which Mr Macron has singled out for criticism.
As well as spelling out the horrific costs of conflict to those with arsenals capable of waging a third world war, the ceremony also served up a reminder of the sweetness of peace, when school pupils read from letters that soldiers and civilians wrote 100 years ago when guns fell silent on the Western Front.
The armistice commemorations were followed by the opening of a three day international peace forum that Mr Macron had promoted, attended by dozens of leaders including Ms Merkel.