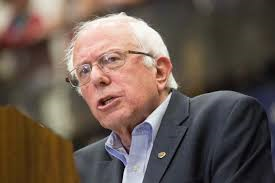 It is possible the 77-year-old could himself run again

Bernie Sanders believes the results of the midterm elections prove a progressive could defeat President Donald Trump in the battle for the White House in 2020.
Mr Sanders, who ran in the 2016 presidential primaries, said in a recent Guardian interview, the Democratic victory to take back control of the House of Representatives sent a “very clear message from the American people against Trump policies, his behaviour and his bigotry”.
On Tuesday night, women—particularly women of colour—paved the way to victory in the House. The midterm elections resulted in some historic milestones. Rashid Tlaib of Michigan and Ilhan Omar of Minnesota were the first Muslim women elected to Congress. In New York, Alexandria Ocasio-Cortez became the youngest women elected into the House. Sharice Davids of Kansas and Deb Haaland of New Mexico became the first Native American women elected to the US legislative branch, and Ayanna Pressley became the first black woman to serve as a Congresswoman for Massachusetts.
But as anticipation builds for the 2020 election cycle, Mr Sanders is “talking to a lot of people and doing a lot of analysis” on who is best suited to win in the toss-up states Hillary Clinton lost in 2016.
“The question we have to ask ourselves is which of the candidates out there is going to win in Michigan, in Ohio, in Pennsylvania, in Wisconsin, in Florida,” Mr Sanders added. “That is the challenge.”
The midterm election results serves as good news, and momentum, for Democrats—specifically, progressives. Although Republicans Rick Scott and Mike DeWine won their senate and gubernatorial elections in Florida and Ohio, Democrats were triumphant in unseating Republican Wisconsin Governor Scott Walker, and winning the governorships of Michigan and Pennsylvania.
In November 2016, Wisconsin, Michigan and Pennsylvania all voted for Mr Trump.
Mr Sanders has not confirmed his intentions on whether he will run in 2020. He wanted to ensure that Americans are able to take a breather from the constant election cycles, he said. But more than running for president, the Vermont Democratic senator said he wanted to ensure the Democratic Party found the perfect candidate to defeat Mr Trump.
“I want the strongest candidate that we can have so that we can beat Trump – that is the most important,” he said. “There are some very good people out there who have indicated they are thinking about running. I certainly don’t think I am the only one.”
Mr Sanders is a part of a long list of anticipated presidential hopefuls among his party. Others include, former Vice President Joe Biden, Massachusetts Senator Elizabeth Warren, California Senator Kamala Harris, and New Jersey Senator Cory Booker.
The midterm elections also has put the spotlight on Democrats Andrew Gillum, who almost beat Republican Ron DeSantis for Florida’s governorship, and Beto O’Rourke, who was narrowly defeated by incumbent Republican Senator Ted Cruz in deep-red Texas, as inspiring contenders for the White House in 2020.
Mr O’Rourke, whose charisma and campaign is often compared to that of former President Obama, also earned the approval of former President John F. Kennedy’s grandson—Massachusetts Congressman Joseph Kennedy III.
Mr Sanders believes that both Mr O’Rourke and Mr Gillum offer an effective strategy in winning in deep-red conservative states come around the 2020 election cycle. Their campaigns offered a “level of excitement that I know has not been seen in Florida or in Texas in a very long time,” the progressive senator said.
He also credits the Democratic House victory to their commitment in campaigning for progressive policy reform: single payer healthcare, affordable wages and free higher education.
“Take a hard look at the [House Democrats] elected to Congress next year,” Mr Sanders added. “It’s not just that many of them are women or people of colour – many of them are progressives who won their elections demanding Medicare for All [government-backed health insurance], demanding raising the minimum wage to $15 an hour, and making public colleges and universities tuition free.”