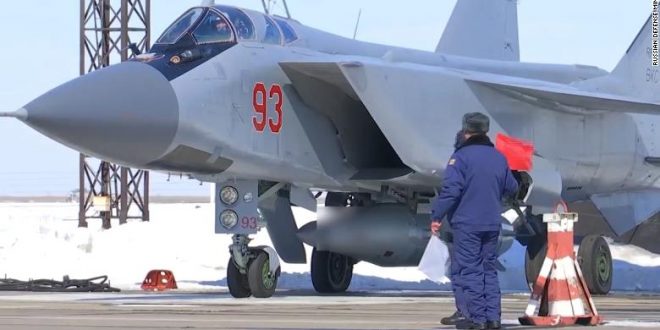 Russia’s Defense Ministry says it has successfully tested one of the “invincible” missiles that President Vladimir Putin said earlier this month could deliver a warhead at hypersonic speed and pierce US defenses.
“A MiG-31 fighter crew of the Russian Aerospace Forces conducted a combat training launch of a hypersonic missile of the Kinzhal high-precision air missile system in the designated area,” the ministry said in statement Saturday.
“The hypersonic missile confirmed its technical operational performance and timing data of the Kinzhal missile system,” the statement said.
The Russian Defense Ministry has released what it described as footage of the Kinzhal launch. The video appears to show a military jet carrying a missile. Some parts of the missile are blurred.
The weapon, designed to eliminate targets on the ground and at sea, hit its assigned target at a training ground, the ministry said, and described the launch as “normal.”
Russian military personnel have been trained to carry out day and nighttime flights with the weapon in any weather conditions, the ministry said.
The ministry said that, due to the high flight characteristics of the MiG-31 aircraft and advanced high-maneuverable hypersonic technology, “the Kinzhal has no analogues in the world” — a claim US officials have downplayed as “election rhetoric” ahead of Russia’s presidential vote on March 18.
In an annual address to the Russian Parliament, Putin said Russia had developed a new, nuclear-capable cruise missile with “unlimited” range that is able to elude air defense systems. He also said Russia had developed an “invincible” missile that can deliver a warhead at hypersonic speed.
“Russia still has the greatest nuclear potential in the world, but nobody listened to us,” said Putin. “Listen now.”
Talking to reporters while en route to Oman on Sunday, US Defense Secretary James Mattis expressed skepticism at Russia’s claims of having developed such high-tech missiles, saying such technology is “still years away.”
“I saw no change to the Russian military capability, and each of these systems he (Putin) is talking about that are still years away, I did not see them changing the military balance,” said Mattis. “They did not impact any need on our side for a change in our deterrent posture.”
While Putin may have been boasting about Russia’s resurgent military might in order to bolster his image as a strong leader at home and on the global stage, Mattis said the show of force is still against Russia’s own interests.
“Let me talk about the end state. How many years away they are, how much money they want to put into this arms race that they are creating with themselves,” said Mattis.
“At the end of the day, they can sink all that money in; it does not change my strategic calculation,” he said. “I just assumed it would all happen at great expense to the Russian people. It does not change anything.”
A US official with knowledge of the latest Russian military assessment also expressed doubt to CNN that the weapons Putin described were even close to being operational. If Russia ever attacked the United States, it would be met with overwhelming force, said the source.
US State Department spokeswoman Heather Nauert said department officials watched Putin’s address and the weapons presentation, which featured an animation of a nuclear strike against the United States.
“That’s certainly something that we did not enjoy watching,” she said. “We don’t regard that as the behavior of a responsible international player.”
Russia’s Defense Ministry has launched a web page seeking the public’s help with naming its new arsenal.