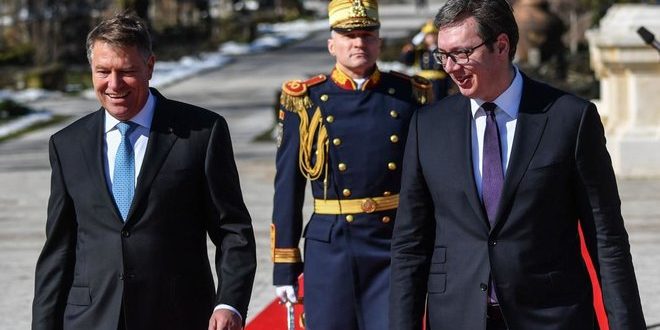 Serbia ‘open to solutions’ on Kosovo

BUCHAREST, Romania: Serbia’s president said Thursday that his country won’t recognize Kosovo as an independent nation, but is open to discussing solutions to the contentious issue.
“If we recognize Kosovo … Albanians will gain everything, and my question is — what will Serbs get?” said President Aleksandar Vucic, who was in Romania for talks with President Klaus Iohannis.
“You’re going to get your monasteries protected, your churches protected. My counter question … would be — and otherwise you would burn it, or what?” he said in English, echoing the emotions of many Serbs who view Kosovo as Serbia’s historic heartland and refuse to give up claims to it.
He added, however, that Serbia is willing to discuss “all possible solutions,” though part of the issue is “how to sell it to our public and how the Albanians sell it to their public.”
Vucic said if both sides delivered a solution “it will mean that we do care about the future of our people and the future of our nation,” although he acknowledged that failure was a more likely outcome.
Last month, during a visit to Belgrade, European Commission President Jean-Claude Juncker told Serbia it had to solve its dispute with Kosovo and implement a series of reforms before it can join the European Union.
Vucic thanked Iohannis, who offered to help on the Kosovo issue. Romania traditionally has good relations with Serbia and supports its bid to join the European Union.
“If the solution is not fair…. and is not supported, it won’t be a solution,” Iohannis cautioned.
Kosovo unilaterally declared independence from Serbia in 2008 and is recognized by 115 countries. Serbia and Romania do not recognize Kosovo.
About 10,000 people were killed during the 1998-99 war in Kosovo which ended when NATO bombed Serbia to end its crackdown against independence-minded ethnic Albanians.