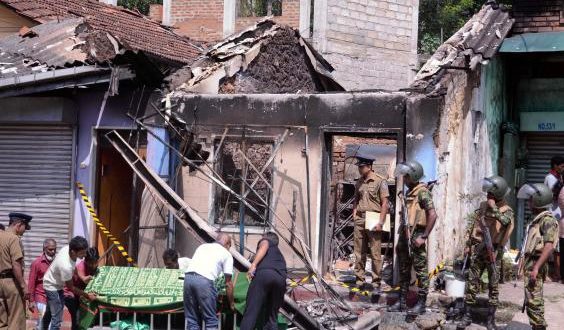 Sri Lanka has declared a state of emergency after a sudden spike in violence against Muslims in a central town, and amid fears the unrest could spread to other parts of the country.
President Maithripala Sirisena said the declaration would “empower” the country’s armed forces and police to respond to clashes in the hill town of Kandy.
The state of emergency would be put in place for an initial 10 days, a government spokesman said, following an emergency cabinet meeting on Tuesday morning. Special measures would be enforced “to prevent the spread of communal riots”.
On Monday, Buddhist mobs swept through the town and burnt down at least 11 Muslim-owned properties. It came amid claims that a Buddhist man was reportedly killed by a group of Muslims.
The clashes raised the spectre of ethnic violence in a country where, just nine years ago, the government ended a decades-long civil war with ethnic Tamil separatist rebels.
While the specific details of the state of emergency remain unclear, government spokesman Dayasiri Jayasekara hinted that it could include a temporary crackdown on the use of social media. He said some people had been instigating violence on Facebook – the most popular social media site among Sri Lankans – and warned they faced serious repercussions.
It was unclear what the practical implications of the state of emergency would be in the rest of the country beyond Kandy itself. So far, no violence has been reported elsewhere in the island nation.
A tweet from the office of President Sirisena said the decree would “redress the unsatisfactory security situation prevailing in certain parts of the country”. It said the country’s security forces “have been suitably empowered to deal with criminal elements in the society and urgently restore normalcy”.
Kandy has seen a flare-up of violence in recent years as extremist Buddhist organisations have risen in prominence. Sri Lanka as a whole has long been divided between the majority Sinhalese, making up 70 per cent of the population and who are overwhelmingly Buddhist, minority Tamils who are mostly Hindu and make up 13 per cent, and around 9 per cent of people who are Muslims. The country has a population of 21 million.
Sri Lanka remains deeply scarred by its 1983-2009 civil war, when Tamil rebels fought to create an independent homeland. While the rebels were eventually crushed, a religious divide has taken hold in recent years, with hard-line Sinhalese groups accusing Muslims of forcing people to convert to Islam and destroying sacred Buddhist archaeological sites.
Some Buddhist nationalist groups have also protested against the presence of Rohingya Muslim refugees in Sri Lanka. The Rohingya have fled majority-Buddhist Myanmar to neighbouring countries in their hundreds of thousands, with Buddhist nationalism also on the rise in Myanmar.
Lakshman Kiriella, a lawmaker from Kandy, said in parliament that Monday’s attacks were “carried out by outsiders”.
“I am ashamed as a Buddhist and we must apologise to the Muslims,” he declared.
The unrest began after a Buddhist truck driver died on Sunday, days after he was involved in an altercation with four Muslims.
Officials say the cause of the argument remains unclear, but after his funeral on Monday, a Sinhalese mob gathered and attacked Muslim shops and houses.
The body of a young Muslim man was found in one of the burnt-out houses early on Tuesday, police said.
A curfew that was imposed in two districts of Kandy on Monday has now been extended.